Air Malta’s results for the first half of the current financial year show the airline is on track to regaining profitability, with the company projecting a loss of just €4 million by March 2016.

Air Malta’s results for the first half of the current financial year show the airline is on track to regaining profitability, with the company projecting a loss of just €4 million by March 2016.

This was announced during Air Malta’s Annual General Meeting today reporting the audited financials for the year ending March 2015, which, as projected, showed a loss of €16.4 million.

Air Malta’s audited financials presented at the AGM for the year ending March 2015, showed a loss of €16.4 million.

“This despite, the closure of the Libya route and the drop in the number of passengers from Russia, which contributed to a loss of circa €10 million, increased competition in summer 2014 and an airline with a virtually depleted management structure,” said Chairperson Ms. Maria Micallef.

The results of Financial Year ending March 2015 were also achieved thanks to the renegotiation of the catering contract, which gave savings of more than €4 million annually, and the sale of Selmun Palace Hotel Company Ltd.

Ms. Micallef said the company’s new management had since tackled all the pending items listed in the restructuring plan, including renegotiating pending contracts and divesting of several other businesses. 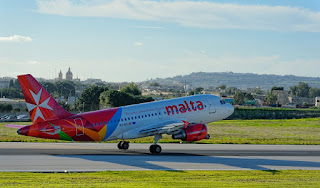 Air Malta’s results for the first half of the current financial year show the airline is on track to regaining profitability, with the airline projecting a loss of just €4 million by March 2016.

“Results for the first six months of the current financial year confirm that the company is €8.7 million better off, from a profitability point of view, when compared to first six months of last year,” said Chairperson Maria Micallef during Air Malta’s Annual General Meeting.

“If these positive trends continue – and if we do not experience any major setbacks such as natural disasters or industrial action in the next six months – we will exit the restructuring programme period with a loss of around €4 million,” she added.

“For the first time in a number of years we have started regaining our market share, despite intense competition and significant additional seat capacity on established routes bound to adversely affect the airline.”

“We are now, finally, starting to reap the benefits of having the right contracts in place,” she said.

Passenger and revenue figures for July 2015 were even higher than they were in July 2013 which had included substantial numbers from Libya.

Malta’s national airline agreed on a restructuring plan with the EU when it was making a loss of €78 million, which demonstrates how far the company has come in a few short years since 2012.

Ms. Micallef said Air Malta had a diligent and professional workforce which now needed to increase its productivity by 25 per cent in some areas for the airline to compete with other airlines at par and not be left behind.

She also underline the need to find a strategic partner.

“No matter how much we address our costs, we shall never be able to negotiate with the same clout of airlines that have fleets of hundreds of aircraft. We will not be able to negotiate the same costs for fuel, for maintenance, for IT systems and for everything else. And, in an industry driven first and foremost by cost and pricing, this means we shall never be able to compete effectively,” she said. Therefore, Air Malta would definitely gain advantages from a potential strategic alliance to beat the challenges brought by the lack of economies of scale the airline has at the moment.”

Ms. Micallef emphasized that during the last six months of the Restructuring Plan all stakeholders must show how much they care about the airline.

“Let us work hand in hand to achieve a result we can all be proud of. We cannot afford any personal interest or stubbornness if we want to achieve this. Let us instead be the stakeholders of a small country who came together when it mattered most, to achieve something beyond the reach of much larger countries. Let us show we care more.”