The world knows Canada’s Whistler as the site of the skiing events during the 2010 Winter Olympics. But Whistler is much more than that.

The world knows Canada’s Whistler as the site of the skiing events during the 2010 Winter Olympics. But Whistler is much more than that. Unlike some former Olympic venues that are now virtually shuttered, today’s Whistler is a bustling four season resort, and you don’t have to be a world-class athlete to enjoy it. 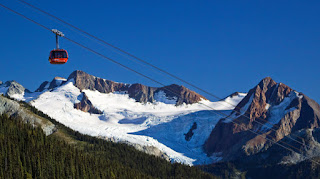 The Whistler resort area is about eighty miles north of Vancouver, British Columbia, via the Sea to Sky Highway, one of the most scenic roads in North America. Though well established as Canada’s premier ski area, summer guests have outstripped winter visitors in recent years. In all, more than two million people annually vacation in Whistler, and there is plenty to do, no matter what the season.

Whistler’s attractions, besides the skiing and mountain biking that bring on the sporting types, include scenic gondola rides, hiking and cycling trails, golfing, canoeing, kayaking, river rafting, fishing, ziplining, and even bungee jumping. Oh, and then there’s the nightlife.

Though the area’s preservation efforts have made it a naturalist’s paradise, with rugged backcountry populated by black bears and many other species, Whistler Village teems with another type of wildlife. Numerous pubs, wine bars and lounges make the apres-ski (or apres-bike) scene a memorable Whistler experience. There are also many restaurants, from gourmet-class to comfort food. Some favorite dining stopovers include La Brasserie des Artistes, Dubh Linn Gate Irish pub, Mongolie Grill, the Bearfoot Bistro, and, of course, the Moo ice cream parlor. A wide array of special events, such as the Great Outdoors Festival and the Cornucopia Wine and Food Festival, keep things lively throughout the year.

There’s a wide range of accommodations available in Whistler as well. Choose from luxury hotels like the Four Seasons or the Pan Pacific; alpine-type resorts like the Nita Lodge; moderately priced hotels like the Pinnacle and the Whistler Village Inn; condo and apartment accommodations like Le Chamois; chalets and townhouses for rent; bed and breakfasts; and timeshare resorts. We stayed in the Ironwood at Whiski Jack, a comfortable timeshare with a helpful staff.