Russia has released military monitoring data, which shows Kiev military jets tracking the MH17 plane shortly before the crash – and posed yet another set of questions to Ukraine and the US over the ci

Russia has released military monitoring data, which shows Kiev military jets tracking the MH17 plane shortly before the crash – and posed yet another set of questions to Ukraine and the US over the circumstances of the tragedy.

1. Why did the MH17 plane leave the international corridor?
“Please note that the plane stayed within the corridor until it reached Donetsk but then it deviated from the route to the north,” said Kartopolov.

2. Was MH17 leaving the route a navigation mistake or was the crew following instructions by Ukrainian air traffic controllers in Dnepropetrovsk?
“The maximum deviation from the left border of the corridor was 14 km. Following that, we can see the plane maneuvering to return to the corridor, yet the Malaysian crew did not get a chance to complete the maneuver. At 17.20, the plane began to lose speed, and at 17.23 it disappeared from Russian radars.”

3. Why was a large group of air defense systems deployed to the militia-held area if the self-defense forces have no planes?
“As far as we know, the Ukrainian military had three or four air defense battalions equipped with Buk-M1 SAM systems deployed in the vicinity of Donetsk on the day of the crash. This system is capable of hitting targets within the range of 35 km at the altitude of up to 22 km.”

4. Why did Kiev deploy Buk missile system right next to the militia-controlled area straight ahead of the tragedy?
“We have satellite photos of the places where Ukraine had its air defense units deployed in the southeastern parts of the country. The first three photos were made on July 14. The first photo shows Buk launchers 8 km northwest of Lugansk. You can clearly see a TELAR and two TELs. The second photo shows radars 5 km north of Donetsk. You can see two TARs along with other equipment and technical structures. The third photo shows air defense systems north of Donetsk. You can clearly see a TELAR launcher and about 60 military and auxiliary vehicles, tents for vehicles and other structures.

“Here’s a photo of the same area made on July 17. Please note that the launcher has disappeared. The fifth photo shows a battery of Buk missiles at the village of Zaroshchenskoye 50 km east of Donetsk and 8 km south of Shakhtyorsk on the morning of the same day. The sixth photo shows the same area on July 18. As you can see, the battery has left.” 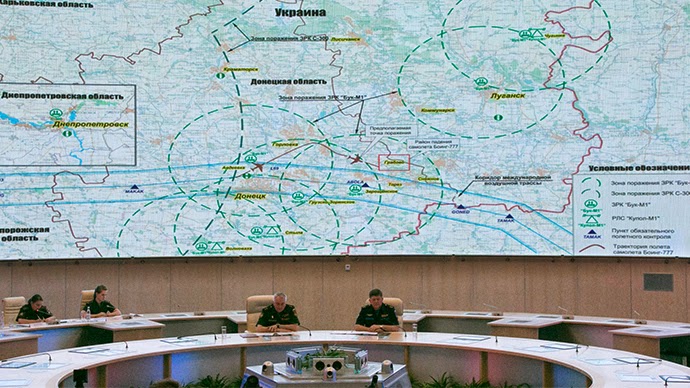 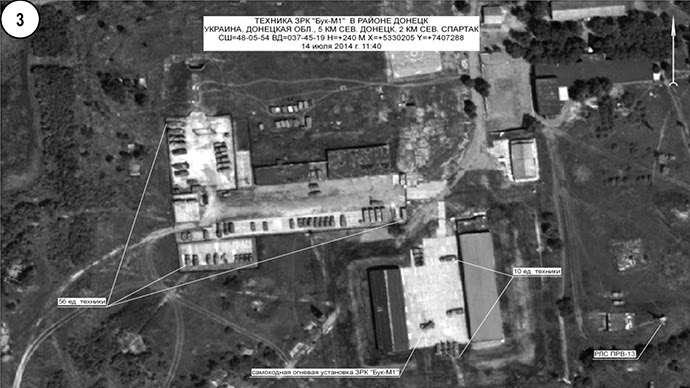 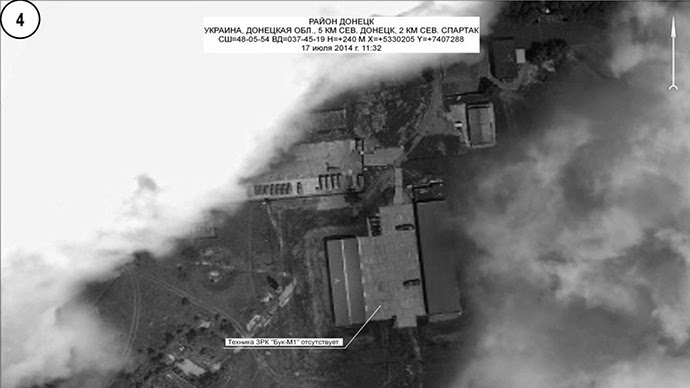 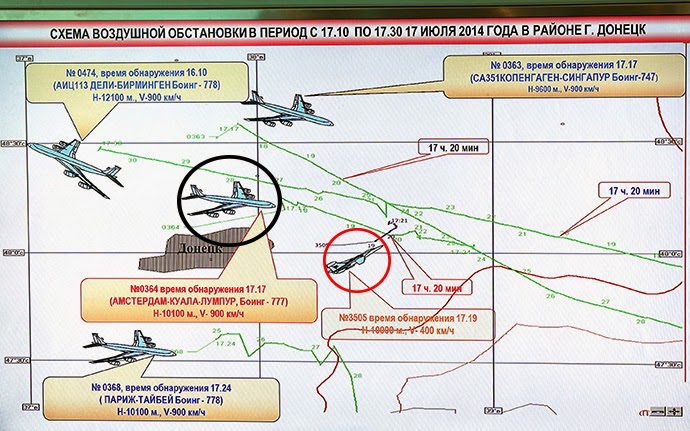 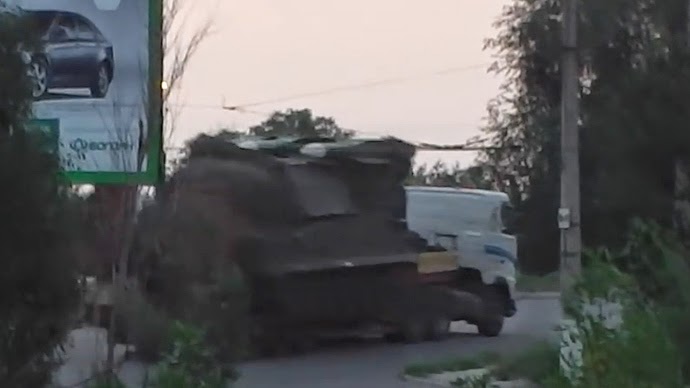 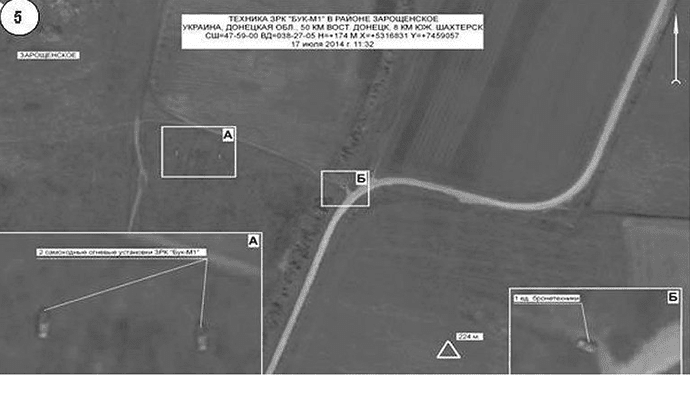 “The Su-25 was 3-5 km away from the Malaysian plane. Su-25 is capable of climbing to the altitude of 10,000 meters for a short period of time. Its standard armament includes R60 air-to-air missiles, which are capable of locking and hitting targets from 12 km and which are guaranteed to hit the target from the distance of 5 km.”

7. Why was the military jet flying at almost the same time and the same altitude with a passenger plane?
“At 17:21’35, with [the Boeing’s] velocity having dropped to 200 kilometers per hour, a new mark detecting an airborne object appears at the spot of the Boeing’s destruction. This new airborne object was continuously detected for the duration of four minutes by the radar stations Ust-Donetsk and Buturinskaya. An air traffic controller requested the characteristics of the new airborne object, but was unable to get any readings on its parameters – most likely due to the fact that the new aircraft was not equipped with a secondary surveillance radar transponder, which is a distinctive feature of military aircraft,” said Makushev.

“Detecting the new aircraft became possible as it started to ascend. Further changes in the airborne object’s coordinates suggest that it was hovering above the Boeing 777’s crash site, monitoring of the situation.

“Ukrainian officials earlier claimed that there were no Ukrainian military aircraft in the area of the crash that day. As you can see, that is not true.”

8. Where did the launcher – from the video circulated by Western media and showing a Buk system being moved allegedly from Ukraine to Russia – come from? As the video was made on the territory controlled by Kiev, where was the launcher being transported?
“I’d like to say that the information we have presented here is based on objective and reliable data from various technical systems – unlike the groundless accusations made against Russia,” said Kartopolov.

“For example, media circulated a video supposedly showing a Buk system being moved from Ukraine to Russia. This is clearly a fabrication. This video was made in the town of Krasnoarmeisk, as evidenced by the billboard you see in the background, advertising a car dealership at 34 Dnepropetrovsk Street. Krasnoarmeysk has been controlled by the Ukrainian military since May 11.”

“This satellite is part of an experimental system designed to track and monitor the launches of missiles of various ranges. If our US colleagues have imagery from this satellite, they should release it for the international community to examine it in detail. This may be a coincidence, but the US satellite flew over Ukraine at exactly the same time when the Malaysian airliner crashed.”

This is not the first time Russia brings up questions on the plane crash. No explanations have followed with Kiev insisting they have full evidence of Russia being behind the attack, but so far only releasing tapes.

The USA, putting the blame on the self-defense forces, has yet refused to release any intelligence material. On Monday State Department Deputy Spokesperson Marie Harf described Russia’s statements as “propaganda and misinformation” – but when reporters asked her whether Washington would be releasing their intelligence and satellite data, Harf only replied “may be.” So far the US has been backing its statements by social media and “common sense.”R