Home » Breaking Travel News » Tourism to the Caribbean growth in 2019 The latest research, which analyses global aviation capacity, flight searches and over 17 million flight booking transactions a day, reveals that tourism to the Caribbean grew by 4.4% in 2019, which was almost perfectly in step with tourism growth worldwide. Analysis of the most important origin markets shows that the increase in visitors was driven by North America, with travel from the USA (which accounts for 53% of visitors) up 6.5%, and travel from Canada up 12.2%. The information was revealed at the Caribbean Hotel and Tourism Association’s Caribbean Pulse session, held at the Baha Mar in Nassau Bahamas.

The top Caribbean destination by far is the Dominican Republic, with a 29% share of visitors, followed by Jamaica, with 12%, Cuba with 11% and the Bahamas with 7%. A series of deaths, which were initially feared to be suspicious, of American tourists in the Dominican Republic led to a temporary setback in bookings from the USA; however, as Americans were unwilling to give up their holiday in paradise, other destinations, such as Jamaica and the Bahamas benefited. Puerto Rico saw strong growth, up 26.4%, but this is better seen as a recovery after hurricane Maria devastated the destination in September 2017. 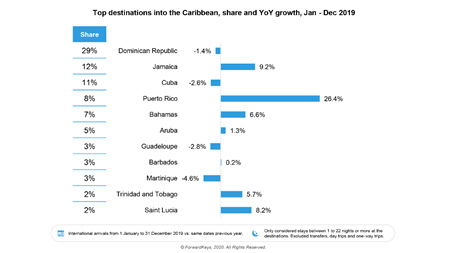 Whilst travel to the Dominican Republic from the USA fell by 21%, visitor numbers from Continental Europe, and elsewhere, swelled to take up some of the vacant accommodation. Visitors from Italy were up 30.3%, from France were up 20.9% and from Spain were up 9.5%. 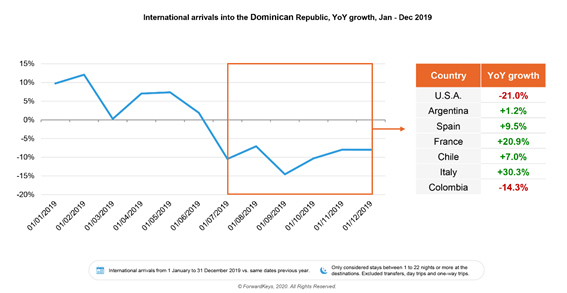 The devastation wreaked on the Bahamas by hurricane Dorian also damaged its tourism industry, as bookings from four of its top seven markets fell significantly during August and continued to be down in October and November. However, December saw a substantial recovery. 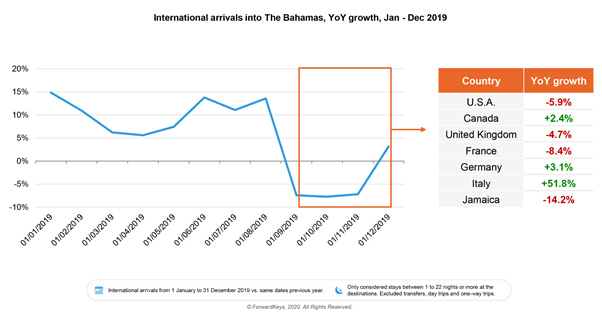 Looking ahead to the first quarter of 2020, the outlook is challenging, as bookings for the period are currently 3.6% behind where they were at the equivalent moment last year. Of the five most important source markets, the USA, which is the most dominant, is 7.2% behind. Encouragingly, bookings from France and Canada are currently 1.9% and 8.9% ahead respectively; however, bookings from the UK and Argentina are behind 10.9% and 5.8% respectively.

According to the World Travel & Tourism Council (WTTC), travel & tourism in the Caribbean is responsible for over 20% of its exports and 13.5% of employment.

Frank J. Comito, CEO and Director General of the Caribbean Hotel and Tourism Association, concluded: “As a regional destination, one of the most useful things we can do is encourage collaboration between countries to build resilience to market shocks. Of course, the better we understand the market, the better placed we are to do that. Having access to the kind of high quality data we shared today will definitely help improve market understanding, planning and decision making.”