While Disney’s “Queen of Katwe” was premiering on the red carpet at the Toronto International Film Festival on September 10, and Hollywood on September 20, a separate press screening was held at C

While Disney’s “Queen of Katwe” was premiering on the red carpet at the Toronto International Film Festival on September 10, and Hollywood on September 20, a separate press screening was held at Century Cinemax in the upscale Kampala surburb of Kololo’s Acacia Mall for a selected media screening.

Accustomed to Hollywood block buster’s where Ugandans stake their claim to the so called’ American Dream’ of first world in sky scrapers,hip hop culture, bling and glamour without the hassle of the cumbrous visa process, ‘ Queen of Katwe’ had the opposite effect as the audience was able to relate directly with the everyday scenes , music and even the cast.

Filming the movie on location (some scenes were screened in South Africa) meant not much need for special effects and makeup where raw sewerage ,trash ,goats ,torrential floods ,rolex(local fast food)boda bodas(motorbike taxis) and even goats ,ducks and pigs featured in the film mingle with residents in shanty dwellings.

For the audience though, the slums of Katwe in Kampala would be the last place one would expect to get inspiration for their aspirations not least from this ‘rags to riches ‘true story of Phiona Mutesi the Ugandan chess prodigy who rose from abject poverty to become a chess grand master. 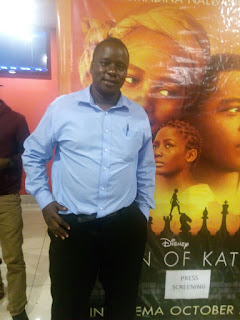 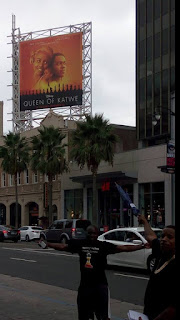 In retrospect after touring Katwe one will quicky realize that necessity is the mother of invention for it is also the hub of Uganda’s informal sector where engineers with no formal education craft or repair used gadgets from milling machines, microwaves to vehicles that would have been declared ‘clinically dead ‘and sent to the scrap yard in the first world. It is therefore not surprising that from this slum ,came Phiona.

On the contrary, Uganda’s tourism authorities, just like many others are more keen to avoid the ghetto through glossy brochures and PR firms to showcase wildlife culture and adventure.

Joshua Ssali Sentongo a Ugandan film tourism promoter who attended the Hollywood event en route to a conference for the Association of Film Commissioners International in Atlanta ,Georgia was unequivocal in criticizing the lack of presence of Ugandan representation at this missed opportunity .’ Paparazzi and journalists from over 100 media houses became crazy but not a single Ugandan official representative or even media house was at such a huge Uganda showcase ‘,he said as if in reference to the reckless sponsorship by the Ugandan Parliament that sponsored 82 legislators to the recent Ugandan North American Convention (UNAA)that took place in Boston.‘ Disney has posted gigantic billboards of the film in over 12 states. How much would that cost the tax payer if they were national ads’? Joshua adds.

One would hasten to add that instead of spending on all those mostly clueless legislators this should have best been spent on giving Uganda’s marketing gurus Stephen Asiimwe Edwin Muzahura and Sylvia Kalembe of Uganda Tourism Board (who by the way attended the U.N.A.A.) ,just maybe accompanied by Honorable Kato Lubwama a first time member of parliament with a background in comedy, the opportunity to say to Hollywood, that ‘ Uganda is not just Mount Trashmore ‘ but much much more. Not much of Uganda’s tourist attractions is featured in the film,save for scenes of the luxuriant Mabira forest featured at the end of the movie .

There is hope though if the ‘Queen of Katwe’ experience would be promoted in Kampala’s City experience including most of the cast who are in their early teens.All owed to to Phiona ,her coach Robert Katende ,William Wheeler who with film Director, Mira Nair and with many others ,chronicled the the script to its eventual sponsors Walt Disney Studios.

This resonates the words of Lupita Nyongo cast in her role as the mother of Phiona Mutesi along side Hollywood star, David Oyelowo, who said at the Hollywood launch“This is a film that speaks of the power of giving children an opportunity to dream. “And how it doesn’t just take the dreamer, it takes the community around them. It’s important for people in power to recognize and facilitate the support for children, for young people.”

With reference to Michelle Obama Oyelowo says “The first lady’s initiative, ‘Let Girls Learn’ is a fantastic one, and it’s a necessitous one, and this film absolutely speaks to that. “It also speaks to mentorship, you know, the president’s ‘My Brother’s Keeper.’ What my character does in this film is to take someone who otherwise would not have the advice, the fathership that I provide, let alone the skills. And that’s significant in any community, in every community.” ( Washington Post)

Worldwide theatrical release is slated for September 30 the day before the film premiers in Kampala on 1st October at Century Cinemax.It will be graced by the entire cast and crew and other big names from from the world of cinema. The film will make its European debut at the BFI London Film Festival on October 9, 2016