Home » Travel News » Man on man rape at the Hilton Hawaiian Village: Washed under the carpet by Honolulu Police?

Man on man rape, this is embarrassing for Hilton Hotels and Resorts. It happened in Hawaii.

Man on man rape, this is embarrassing for Hilton Hotels and Resorts. It happened in Hawaii. A Florida man was brutally attacked and permanently injured in a Hilton Hotel Room in Waikiki by a British guest, who happened to be a member of the Royal Military. The attacker was able to leave the country only one day after the alleged rape and attempted murder committed by him without ever being charged.

He went home to Britain unharmed, while his victim suffered permanent brain damage, live threatening injuries unable to work now for 2 years. There has been no sympathy, no support by Hilton Hawaiian Village, except for a one year tress pass notice issued to the victim. There is more silence from Hilton Hotels and Resorts Worldwide. An initial phone call was returned to eTN by Hilton corporate, but no comments, no follow up.

Hilton’ response to a hate crime against a gay man and a guest occupying a suite at the Hilton Hawaiian Village Hotel in Waikiki, Hawaii is surprising and shows a no care attitude.


This is a very different picture from what Hilton promotes on their LGBT website as a corporate image. Officially Hilton wants LGBT tourists to stay with the hotel group to experience history, culture and nightlife of top gay destinations around the world. Special Go Out packages are advertised on the Hilton Website.

Hilton Waikiki was the host for the first LGBT Hawaii Tourism meeting two years ago and had been a firm supporter for the LGBT travel and tourism industry in the Aloha State.

Surprising is that the same company apparently turns a blind eye on a hate crime against a gay guest committed on their property. Even more surprising is theta the victim was also a top premium member of the company’s Hilton Hhonor program.

Hilton made sure the media was not made aware of this crime. Not even the LGBT spokesperson for Hilton Hotels and Resorts had anything to say to eTurboNews.

The Honolulu Police Department arranged for the attacker to be released the day after he almost killed someone, and able to leave the United States for the U.K, while the victim was put under arrest in Queens, a Honolulu Hospital fighting for his life and unable to get his side of the story out, so his completely unharmed attacker would face justice.

The hotel room was destroyed after the violent outburst by the unharmed attacker.

The victim is Brad Toston from Tampa, Florida. He visited his favorite vacation spot Hawaii in September 2014.

For two years Mr Toston had been running against brick walls to receive justice. 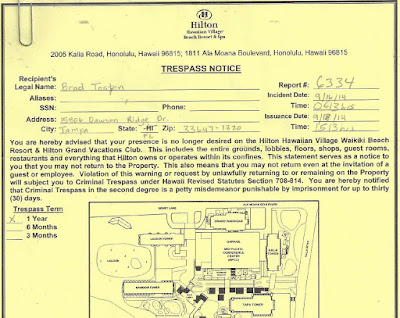 Mr. Toston claims:
Honolulu Police Department is required by federal law to notify the FBI if a hate crime is reported or even if there is a presumption of a possible hate crime.

Mr. Toston’s repeat and well documented demands to police officers to charge his attackers were ignored, and the attacker was released and went back to the U.K.

His letter to the State of Hawaii Attorney General dated July 11, 2016 says it all:

I was the victim of a violent Hate Crime including Assault, Rape and Attempted Murder at the Hilton Hawaiian Village in Honolulu’s Waikiki Beach in September, 2014. I suffered a traumatic brain injury, concussion, unconsciousness for 30 to 60 minutes, a broken jaw, broken nose, broken eye socket, fractured throat, large lacerations to my head, broken teeth, torn rotator cuff and bruised ribs among my injuries. I was horrified to discover how the investigation was mishandled. Police manipulated the investigation, changed police reports and then the case just went away without any charges being filed. My assailant was released and set free by police. I had always maintained that I wanted to file charges but I was denied that right. I wasn’t even given the right to legally provide a statement. Police closed the case and refuse to reopen it or investigate any further.

This letter serves as my demand to formally file charges against my assailant, Anthony Spinga, for committing a Hate Crime, for Assault, for Rape and for Attempted Murder.

I am also demanding an investigation and corruption charges to be filed against the Hilton Hawaiian Village, it’s management, it’s security, Hilton Hotels and any employee, corporate officer or director involved in covering up my violent assault or collaborating with the Honolulu Police Department in manipulating and covering up the case.

Because the Honolulu Police Department has been so adverse towards me, uncooperative and denied me a full, un-redacted copy of the police report, I am asking you or for you to petition a judge to extend my statute of limitations to begin after I receive the police report and investigation information. By denying me the police report the police have effectively and corruptly stopped me from taking any legal action.

After the Orlando Pulse nightclub massacre we see that Hate Crimes do still exist in this country. And unfortunately the Honolulu Police Department condones acts of violence against the gay community. If you request the crime scene photos you will see how badly I was beaten. You will see why I was considered a homicide victim when I was admitted to the trauma center. I expect nothing but the most professional and unbiased attention to my case. Federal authorities may be best suited to investigate this atrocity in your state.

I look forward to a full and transparent investigation.”

The response by the Hawaii Attorney General was for Mr. Toston to contact the prosecuting attorneys office. When the victim did, that office again told him to talk to the Honolulu Police Department.

The department is under the supervision of the mayors office, county of Honolulu.

eTurboNews contacted LGBT Hawaii (lgbthawaii.com). LGBT Hawaii presented the case to Honolulu mayor Kirk Caldwell, who was last week on a campaign event lobbying the LGBT Caucus of the Democratic party for LGBT votes. As a result, a HPD police officer contacted Mr. Toston only to give him more runaround and show him more brick walls – two years later.

This week Mr. Toston received a phone call by Detective Lee in the professional standards office of the Honolulu Police Department.

Mr Toston told eTN: ” I just don’t think the Detective got it. I don’t think they had my full letter of complaints. I finally told him to get the police report and familiarize himself with it and the officers involved. He seemed to not understand the gravity of my complaints or was minimizing it all.”

Mr. Toston continued to tell eTN: “I also received a call by a Detective Robert Jones. He asked him a few questions and when I told him I had talked to the professional standards office he ended the call quickly. Detective Jones was one of the officers mentioned in my complaints.”

“Detective Lee told me in our conversation that is is not necessary to interview all parties in a criminal investigation. It blew me away, because them not interviewing me resulted in the attacker to be released.”

There is a lot more to the story, stay tuned.

According to Mr. Toston, crime statistics for the Hilton Hawaiian Village between 2009 and 2013 as they were provided by the Honolulu Police Department:
1052 Police Related Crimes, 452 were related to Rape, Robbery, Aggravated Assault, Assault, Weapons, Drugs and Burglary.