New York, NY, June 2, 2016 — Guests of the Antigua & Barbuda Tourism Authority were treated to a Celebration of Film and Television in honor of Ms.

New York, NY, June 2, 2016 — Guests of the Antigua & Barbuda Tourism Authority were treated to a Celebration of Film and Television in honor of Ms. Marianne Jean-Baptiste, Academy Award Nominee and star of NBC’s “Blindspot” last night at the Crosby Street Hotel. Born to an Antiguan mother, Ms. Jean-Baptiste has always embraced her Antiguan and Barbudan heritage and was named ‘Honorary Tourism Ambassador’ to the island nation. 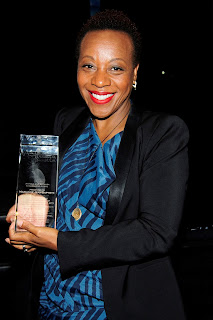 Marianne
Jean-Baptiste with her award (photo by Paul Bruinoooge)

The evening’s event was attended by approximately 100 of the top-tier media, trade, travel partners, investors and producers, and was part of a week-long extravaganza known as CTO (Caribbean Tourism Organization’s) Week in New York City. The week brings the Caribbean together – Government officials, Tourism Boards, Hotel Association, and Press – to showcase all that the region has to offer visitors.

In addition to NBC’s “Blindspot,” and her upcoming role in the new series, “Training Day,” Ms. Jean-Baptiste’s body of work includes such stand out performances as her role in “Secrets and Lies,” a performance so wonderful that she was nominated for both a Golden Globe and an Oscar.

The evening also included the worldwide premiere of PBS’s award-winning documentary
“Music Voyager: Antigua and Barbuda,” which was filmed on the islands last year and highlights the story of Antigua and Barbuda through music and culture allowing viewers to experience the country through the eyes of the locals, their culture and their words.

The week began with a segment on FOX 5’s popular morning news program “Good Day New York,” promoting Carnival through steel pan music and costumes. At yesterday’s event, interviews were conducted with Tourism Consultant Ms. Shirlene Nibbs who shared the latest developments on the islands in tourism and why visitors need to visit Antigua and Barbuda this year. The interview will air in local TV markets including Connecticut and NBC affiliates.

In addition to hosting this successful evening Antigua and Barbuda has participated at the highest level events for CTO Week, including in the corporate service at St. Gabriel’s Episcopal Church on Sunday, May 30th, along with various meetings with Minsters, Directors and Commissioners of Tourism throughout the Caribbean to strategically work together to enhance the strength and impact of the region.

ABOUT ANTIGUA AND BARBUDA

Antigua (pronounced An-tee’ga) and Barbuda (Bar-byew’da) is located in the heart of the Caribbean Sea. The largest of the Leeward Islands, Antigua & Barbuda comprises 108-square miles. The 365 white and pink sand beaches, one for every day of the year, are just the beginning of the treasures that await visitors.

Antigua’s rich history and spectacular topography provide a variety of popular sightseeing opportunities. Nelson’s Dockyard, the only remaining example of a Georgian fort commissioned by the British in 1755, is perhaps the most renowned landmark. Betty’s Hope, built in 1674, is the site of one of the first full-scale sugar plantations on Antigua, and offers a chance to step back into time by visiting the restored mills.