Minister Alain St.Ange of the Seychelles is heading to the US island of Guam for the 2016 PATA Annual Summit.

Minister Alain St.Ange of the Seychelles is heading to the US island of Guam for the 2016 PATA Annual Summit. This follows an official invitation letter to the Seychelles Minister by Mario Hardy, the Chief Executive Officer of PATA, for Minister St.Ange to be the keynote speaker at the PATA annual summit in Guam May 18-21 that will be held at the Dusit Thani Guam Resort. 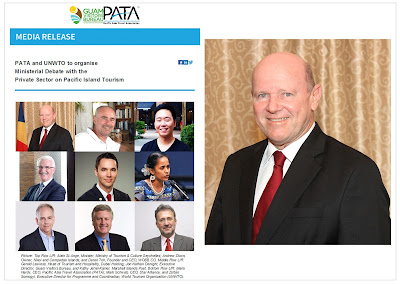 The Pacific Asia Travel Association (PATA) is a not-for-profit association that is internationally-acclaimed for acting as a catalyst for the responsible development of travel and tourism to, from, and within the Asia Pacific region. The association provides aligned advocacy, insightful research, and innovative events to its member organizations, comprising 97 government, state, and city tourism bodies; 27 international airlines, airports, and cruise lines; 63 educational institutions; and hundreds of travel industry companies in Asia Pacific and beyond. Thousands of travel professionals belong to the 43 local PATA chapters worldwide. The association also has official offices or representation in Beijing, Sydney, and London.

“This was a golden opportunity to increase the visibility of Seychelles in Asia and one we could not miss. Air Seychelles has started direct non-stop flights to Beijing in China, and as a country, we have been actively working to claim our fair share of tourists from Asia as a whole. With Sharanjit Leyl, the BBC World News presenter moderating the Guam Summit, we are sure that Seychelles was be able to once again be seen, be noticed, and also get the needed visibility it continues to need to remain relevant in the world of tourism,” said Minister Alain St.Ange as he was preparing to head to Guam.

On this Guam meeting, the PATA CEO, Mario Hardy, said: “Preliminary figures from PATA indicate that 38 destinations in the Asia Pacific region welcomed 537.8 million international visitor arrivals in 2015, and that number is expected to reach more than 650 million by 2020. While this growth is surely impressive, it becomes imperative that both the public and private sector work together to ensure sustainable and responsible growth of the travel and tourism industry. The UNWTO/PATA Ministerial Debate is the perfect platform for bringing together both parties to work towards these goals.”

And on his part, the UNWTO Secretary-General, Taleb Rifai, said: “Islands are home to some of the richest marine and land biodiversity on Earth. Because of this, they are also a top destination for millions of tourists each year. The special geographical situation of islands makes them unique, but at the same time, this poses a number of challenges for them, including sustainability, climate change, air connectivity, and positioning islands as top choice destinations in the minds of tourists. This Ministerial Debate will serve as an important preparatory exercise for the International Year of Sustainable Tourism for Development, 2017, adopted by the United Nations General Assembly.”

“This is the first time PATA and the United Nations World Tourism Organization are coming together to host this historic meeting in the Pacific. The discussion of important issues, such as global warming and sustainable tourism, are very relevant to the region as well as the global tourism industry,” said GVB Executive Director Nathan Denight. “Guam has been a regional hub in the Pacific for hundreds of years, and in this modern age, we are America in Asia and the perfect destination for high-level meetings. We look forward to welcoming all the delegates and guest speakers to our island paradise.”

PATA and the UNWTO are especially honored to have Marshallese poet, writer, artist, and journalist Kathy Jetnil-Kijiner officially open the debate. Her poetry focuses on raising awareness on issues and threats faced by the people of the Marshall Islands. She has performed at the opening ceremony of the UN Climate Summit 2014 in New York and the 2015 United Nations Climate Change Conference (COP 21) in Paris.

Seychelles is a founding member of the International Coalition of Tourism Partners (ICTP) . For more information on Seychelles Minister of Tourism and Culture Alain St.Ange, click here.