PARIS, France – French travel agencies have pledged their support in marketing Zambia as a prime tourist destination to the market in France.

PARIS, France – French travel agencies have pledged their support in marketing Zambia as a prime tourist destination to the market in France.

This came to light when Zambia’s Ambassador to France His Excellency Humphrey Chilu Chibanda met key French travel Media and more than 30 travel agencies selling Africa, at the Zambia Embassy in Paris. 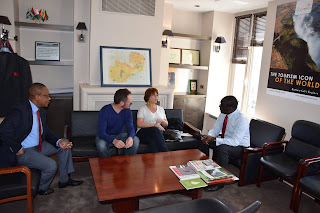 In his remarks, Ambassador Chibanda recognized the fact that tourism was a multi-faceted and complex industry facing incredible challenges to develop and retain market share within the highly-competitive global market.

“Tourists have become increasingly knowledgeable and are, in many cases, more interested in an experience than in a destination itself, and Zambia offers both a perfect destination and a complete experience,” Ambassador Chibanda said.

The Ambassador appealed to the travel agents to support Zambia by increasing tour packages to the country for their long haul French tourists. He informed the meeting that, Zambia was one of the unexplored tourist destination that possessed tourism offerings which would easily appeal to many French tourists.

Ambassador Chibanda told the meeting that Zambia had since her independence from the British in 1964 remained among the most peaceful countries in the world and had never experienced any turmoil or civil strife. 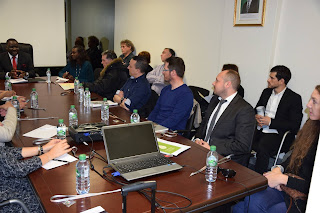 He said he was happy that the interaction with tourism partners in France was taking place at a time when Zambia had identified and prioritised the sector as one of the key growth areas of the economy because of its potential to be a major foreign exchange earner and contributor to socio-economic development of the country.

Ambassador Chibanda stressed the need for tourism destinations and businesses to forge strong partnerships in order to succeed in today’s competitive world. 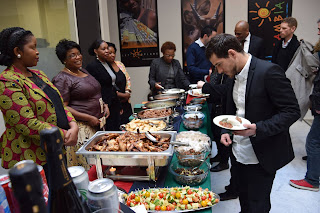 “Beyond this, there is the task of making sure the products a destination is offering are known to the customers, and I can assure you those that have travelled to Zambia have fallen in love with our country and we are counting on your support,” said Ambassador Chibanda.

The Ambassador who is also a Permanent Representative to the UNWTO stated that; tourism, due to its high labour demand, was also recognised to be an important source of jobs, prosperity and competitiveness. “Zambia, as a developing country has singled tourism as one of the priority areas for investment, due to its numerous forward and backward linkages to various sectors of the economy. Tourism expenditures cut across the entire spectrum of the economy through its multiplier effects,” he said. 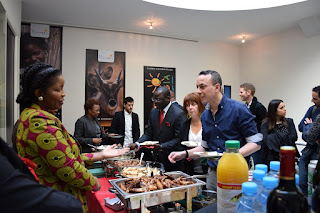 He noted that tourism had a positive effect on several sectors of the economy such as transport, communication, agriculture, manufacturing, and infrastructure among others.

Further, the Zambian envoy to France also shared, Government’s VISION for the tourism sector which is to: “make Zambia an exciting and growing destination that realizes its full potential and rewards tourists with unique, authentic and treasured experiences.” In realizing this vision, government aims to be among the top five tourist destinations of choice in sub-Saharan Africa by 2030, said the Ambassador. 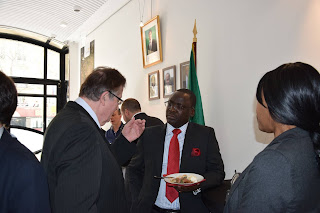 And making the presentation to the team under the title ‘Destination Zambia, Let’s Explore,’ First Secretary for Tourism at the Embassy and Liaison Officer to the UNWTO, Percy Ngwira, highlighted abundant wildlife, the Victoria Falls and the warm Zambian hospitality as among the key offerings to visitors.

Mr. Ngwira, who referred to the Victoria Falls as the country’s natural equivalent to the “Eiffel Tower” much to the amusement of the participants, also named Zambia’s rich cultural heritage, peace and tranquility, the more than 7,000 heritage and historical sites dotted around the country as key factors that made Zambia the preferred destination.

He told the participants that Zambia’s most important tourism product was her “people.”

“The Zambian people are some of the most hospitable you can ever meet in Africa,” said Ngwira.

And some travel agencies informed Ambassador Chibanda that Zambia offered the best among new destinations in Africa.

“Zambia is not yet a famous tourism destination in France like some of her competitors. However, the country offers some of the best tourism products that would be of interest to the French tourists,” said Mr. Razkallah Ja’far, Tailor-Made Product Manager for Africa and UAE from TUI GROUP France.

They pledged to work with the Embassy in promoting destination Zambia in France. In addition, they also promised to start selling Zambia as a single destination in addition to packages where Zambia is sold as an extension.

In attendance also were also representatives from airlines servicing Zambia including South African Airways and Kenya Airways. The travel media was represented by journalists and directors from French travel media among them Tour Hebdo, TourMag.com, Tourism T.V and some key independent French travel bloggers.

The interaction also saw two French bloggers who had travelled to Zambia for the Livingstone International Culture and Arts Festival (LICAF) sharing their experiences including their “walk with Lions” in Livingstone which they described as one of the most unique products the country has to offer.

After the formal presentations the participants joined the Ambassador in sampling the Zambian cuisine which included nshima, kapenta, fisashi, chikanda, finkubala, among several other dishes as part of the experience of Zambian hospitality.