The nightmare of sandless Diani beaches is looming large again after a Chinese company, the China Roads and Bridge Corporation, decided to appeal a decision by the Kenyan environmental tribunal that n

The nightmare of sandless Diani beaches is looming large again after a Chinese company, the China Roads and Bridge Corporation, decided to appeal a decision by the Kenyan environmental tribunal that no more dredging was permitted off Diani beach without a full environmental and social impact assessment study. A hearing before the High Court has reportedly been scheduled for Friday, though it can take time to hear what no doubt will be a large number of expert witnesses to testify.

That appeal, however, seems to have not been enough for the Chinese company, which has reportedly sent out its dredgers again, as incidentally reported by this correspondent last week via a tweet, seeking additional information.

The damage, as reported here last year, is already significant and may take decades to repair both reefs and beaches, and the added illegal extraction of sand so close to the beaches off Diani and Tiwi amounts to “beachocide” in the name of corporate profit.

The mood against Chinese companies, already badly reputed across the board, is bound to take another turn for the worse among conservationists, now that these new allegations have come into the public domain.

A usually reliable source at the Kenya coast with good connections to government has gone a step further and alleged that this impunity can only happen with the tacit approval by government sources, which have expressed in different fora their displeasure that the lack of sand may delay if not stall the Standard Gauge Railway project.

“There is chatter that certain government officials are alledgedly looking the other way when the dredgers sail and return. If that is really the case it amounts in my view to contempt of the Environmental Tribunal, amounts to a criminal activity. Besides, wrecking our award winning south coast beaches amounts to economic sabotage because tourists will stay away when there are only rocks left and no sand. The white sand beaches of Diani have earned award upon award in the past and this gave us a big marketing boost. This is all completely insane and I hope the appeal by the South Coast Residents Association to bring pictures as evidence for the upcoming court hearing should be heeded. We must mobilize all resources we have, even use drones and other means to catch the dredgers in the act, to expose this crime,” the source said. 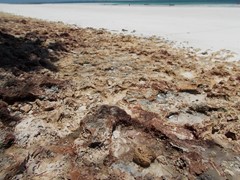 The pictures above were posted with an article last year when a dredger with complete impunity did its dirty work in bright daylight off Diani, with the subsequent damage to fishermen – fish died in large numbers when the water was polluted and saturated by muck and mud – hitting even the local communities hard.

As soon as fresh pictures are available from coastal sources, an update will be posted, but in the meantime, extra vigilance is needed to catch the dredgers in the act and bring crews and companies to book.