Unconfirmed reports about a massive explosion are being reported by Twitter users in the Mexican City of Oxaca late Thursday night.

Unconfirmed reports about a massive explosion are being reported by Twitter users in the Mexican City of Oxaca late Thursday night. There are no reports about casualties, injuries or other reasons or confirmations at this time.

According to tweets the explosion was recorded in the center of San Juan Bautista Tuxtepec. It’s the second most populous city of the Mexican state of Oaxaca. According tweets by local observers are two dead so far. According to reports a rocket exploded.

Oaxaca is a state in southern Mexico known for its indigenous cultures. Its capital city of the same name is noted for colonial buildings often made of green volcanic stone. Oxaca is also a known travel and tourism destination. 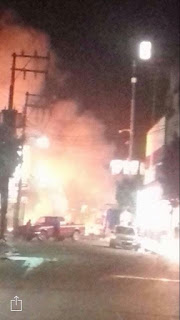 This is a breaking story and eTN will update if anything more major unfolds. Readers in Oxaca are encouraged to write to [email protected] with updates or tweer @eturbonews