UGANDA (eTN) – The just-concluded Pearl of Africa Tourism Expo and Excellence Awards witnessed the signing of a Memorandum of Understanding (MOU) on the sidelines between BirdLife International and the East African Community (EAC) on November 20, 2015 at the Kampala Serena International Conference Centre. 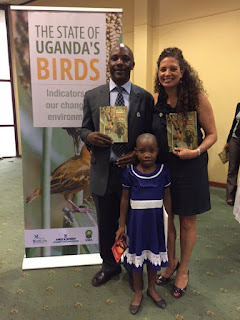 The previous weekend had kicked off the Big Birding Day with groups of birding enthusiasts from as young as 7 years to seniors pitted against each other in a race to identify the most bird species between Kampala and Lutembe Bay RAMSAR site.

In his introductory remarks, Dr. Julius Arinaitwe, Regional Director for Africa, BirdLife International, stated that the MOU focused on management of trans-boundary key ecosystems shared between the five EAC member countries such as Lake Victoria basin, Lake Kivu, Mount Elgon, and other shared habitats. The conservation of biodiversity ensures that it contributes to sustainable use while making resources available for development and information management in the conservation areas.

The news that vultures are teetering on the brink of extinction in Africa hit home as the BlrdLife International CEO in her presentation warned that they are under persecution with 7 of 11 of Africa’s vultures threatened with extinction.

“Vultures are ambassadors of life, and as nature’s cleanup crew, vultures help reduce the spread of disease to other scavengers such as hyenas and jackals, in so doing keep the ecosystem clean, not only in the wild but in urban centers where hooded vultures primarily consume waste discarded from abattoirs, saving local councils immense costs.

“They are the sentinels of the skies as they soar above the skies over dead rhino, elephant, or beast; they alert rangers of the presence of poachers. In so doing, they face direct persecution from poachers, from taboos, and other superstitious practices and beliefs, or die from eating the carcass of poisoned animals. Without a large and continent-wide response now, the future of vultures in Africa looks extremely grim,” she said.

She, however, ended with an optimistic note sounding that we can help turn around this downward spiral as was the case in Asia where after years of campaigning by conservationists, including BirdLife International, the decimation of vultures in India, Nepal, and Pakistan was reversed.

Uganda’s Minister for East Africa Affairs pledged that this partnership will stand the test of time promising support and commitment from the regional body stated in the provisions of EAC Transboundary Ecosystems Bill 2002.

The occasion also witnessed the launch of a new publication sponsored by Uganda Wildlife Authority titled “The State of Uganda’s Birds” as well as recognition of young birders who had taken part in the Big Birding Day.