AMMAN, Jordan – Odalisque Therapeutic Muds and Salts, a subsidiary of Numeira Mixed Salts and Mud Company located in Jordan is celebrating a victory with their latest partnership with Monaco Business

AMMAN, Jordan – Odalisque Therapeutic Muds and Salts, a subsidiary of Numeira Mixed Salts and Mud Company located in Jordan is celebrating a victory with their latest partnership with Monaco Business Development and Ziyad Mazzawi Corporation as the Guinness World Records acknowledges the longest Slip and Slide at the Dead Sea Jordan. 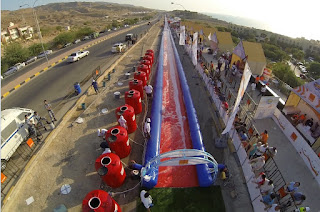 The worlds’ longest slip and slide began its tour of Jordan with a launch at the Dead Sea, Jordan, October 17. The event took place at the lowest spot on earth which is 420 meters below sea level.

The slide will tour Jordan offering rides to those who want to be part of the historic tour.

Odalisque represents products that use the only natural resources Jordan produces in the Dead Sea which are the salt and mud. In the salt and mud, life changing minerals are found representing magnesium, bromide, iodine, sulfur, potassium, and calcium.

Odalisque General Manager, Ismail Daqour was thrilled about the outcome of the latest Guinness World Record and said, ‘We could not be happier for our country of Jordan, this wonderful country of ours deserves to be hailed as a family fun destination. This kind of event proves that Jordan is a world class tourism destination and appropriate for every age group. We are also thrilled that Odalisque could be highlighted throughout the event as a natural and therapeutic product that can make life better.”

Odalisque is no stranger to supporting Jordanian events; others include the “Largest Floating Human Image” of a peace sign and the Dead Sea Mud Festival held in 2014.