ISLAMABAD, Pakistan – Unconfirmed information being gathered in Islamabad suggested that the huge 7.5-magnitude earthquake in Pakistan caused 200 deaths and over 1,300 have been injured in Gilgit, Bal 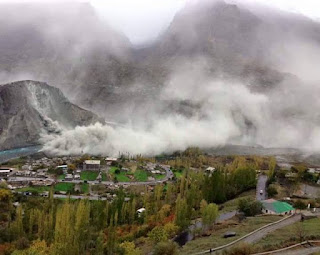 Nobel Prize winner Malala Yousafzai condoled with victims of earthquake and said in her message: 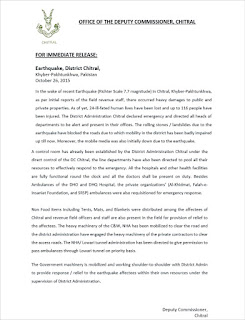 Sources said that the Malala Fund will work actively to raise support for the victim of earthquake soon.

The Prime Minister of Pakistan, Mian Nawaz Sharif, has directed to send 2,000 tents to earthquake affected areas. One MI-17 helicopter has been placed at the disposal of the Khyber Pukhtoonkhwa (KPK) government for relief efforts. Nawaz Shareef Kidney Hospital Swat is to be made functional immediately. A nine-bed mobile hospital with a team of surgeons is to be dispatched to Dir immediately. All warehouses of National Disaster Management Authority (NDMA) have been opened up for provincial disaster authorities.

While talking to media in London where he is staying en route to Pakistan from the USA, the PM expressed his grief over the deaths and devastation caused by the earthquake.

“I will personally monitor rescue and relief operation[s]. I will visit earthquake-affected areas. [The] Indian PM offered … assistance … [with the] earthquake. I contacted … CM KPK Parvez khatak and directed him for [help with] rescue operation[s]. All rescue institutions shall brief me tomorrow,” he added.

The Pakistan Army and other rescue and relief departments are already reaching affected areas, but information flow to cities about damages and deaths is slow because the wireless telephone system including cellular phone towers were also destroyed in the earthquake. Experts who know these areas and their topography fear that the death toll can be over 700.

The first earthquake of the day in this region was reported at 9:45 am which came from 42 km east of Farkhar, Afghanistan. This earthquake was reported 5 hours before the devastating 7.5 earthquake.

Heavy landslides are being reported from Gilgit and Chitral, while the Hunza river was closed down by one landslide.

The earthquake measured 7.5 on the Richter scale and hit Tajkistan, Afghankstan, and Pakistan on Monday afternoon. The United States Geological Survey confirmed that the earthquake epicenter was 45 km north of Alaqahdari-ye Kiran wa Munjan, Afghanistan. Jolts were recorded as far as Lahore in Pakistan.

Major damages from Pakistan are being reported from Chitral, Hunza and Gilgit valleys while Northern Afghanistan and Gorno Badakheshan of Tajikistan were the most damaged areas.

As per an official confirmation, 24 people have died while 116 sustained injuries in various parts of Chitral after houses and buildings collapsed due to the earthquake. Meanwhile, the District Administration Chitral declared an emergency and directed all heads of departments to be alert and present in their offices.

The earthquake was originated from Nuristan, Afghanistan, where the Afghan Taliban have a stronghold, therefore, information was not being instantly dispersed.

Heavy landslides are being reported from Gilgit and Chitral, while the Hunza River was closed down by a landslide.

Reports gathering from Pakistan suggested that Chitral and Gilgit received the worst damage, while Nuristan of Afghanistan was partially destroyed. Initial estimates suggested that over an area of 50 km was fully destroyed while partial destruction was reported in the radius of 100 km around the epicenter.

A big earthquake occurred in October 2005 in the same region. Destruction was less at that time, because the epicenter was almost 212 km deep inside Earth.