Henry Morrison Flagler’s first hotel in Palm Beach was the 439-room Royal Poinciana which opened in 1894.

Henry Morrison Flagler’s first hotel in Palm Beach was the 439-room Royal Poinciana which opened in 1894. It was called the “Queen of Winter Resorts” and was considered the largest resort hotel in the world. In order to build the Royal Poinciana and the Florida East Coast Railway at the same time, workers were brought from the Bahamas. They lived in a segregated camp, called the “Styx” without running water and electricity.

In the center of the six-story building was a large rotunda from which ran several miles of corridors. There were lounges, parlors, drawing rooms and a casino. The interiors were designed with the utmost care and taste. The building was enlarged in 1899 and again in 1901. The hotel was the center of social activity for the wealthy and fashionable. Approximately 1400 employees were on duty during the open season, usually from December to April. In addition to the gala annual Washington Birthday Ball, there were cake walks, teas, balls, dances and expensive catered social events. Extensive outdoor activities included two 18-hole golf courses, tennis courts, motor boats, wicker wheel chairs, bicycles and a mule-drawn trolley car to and from the beach. There were two swimming pools, one with “fresh” sulphur water and one with salt water from the ocean.

Unlike his hotels in St. Augustine which were built of stone and coquina, Flagler used wood for the Royal Poinciana. In season, the Royal Poinciana Hotel employed 400 waiters, 287 chambermaids; it had a separate dining room for the lower echelons of hotel staff, another for first officers, a third dining room for the second officers, a fourth for servants of the guests, and a fifth for children. The staff had its own orchestra for their dances and other social functions. The head housekeeper had a three-room suite. Outdoor activities were very popular at the Royal Poinciana including golf, tennis, boating and fishing and more. In an unfortunate manifestation of the racism of the day, African American bicyclists pedaled guests seated in attached wicker chairs called “Afrimobiles.”

The hotel contained a spacious dining room, fancy shops and an “Ask Mr. Foster” travel office. Outdoor activities included ocean swimming, boating, tennis, golf and day trips on the hotel’s houseboat. The hotel was so popular that it was expanded in 1899, 1901 and 1929 with new guestrooms, dining rooms and a new greenhouse restaurant. Some wealthy guests arrived in their own private Pullman cars which housed their servants during the vacation.

The hotel had the back-of-the-house boiler rooms, generators, kitchens, laundry and staff housing in separate buildings. An 1894 souvenir brochure showed the layout of the laundry and praised its up-to-date technology. Advanced techniques were also evident in the unique fire escape equipment. Each guestroom was equipped with a rope ladder that allowed guests to be lowered mechanically to the ground level. These ladders had seats and galvanized fixtures with ladder hooks.

After Flagler built the Royal Poinciana; he became a major benefactor of the area. He built houses for his employees, contributed to public funds for the contribution of West Palm Beach’s prominent buildings. He gave a plot of lands for a municipal cemetery. He also built a Catholic Church in the city because a large number of his employees were Catholics.

Flagler’s second hotel in Palm Beach was the unpretentious Palm Beach Inn, about a quarter mile east of the Poinciana on the Atlantic Ocean which was built as an annex for bathers and swimmers. It became as popular as the Poinciana with its name changed to the Breakers Hotel. It was destroyed by fire in 1903, rebuilt in 1906 and destroyed again by fire in 1925.

The heirs of Henry Morrison Flagler vowed that this disaster would never happen again. They engaged the architectural firm of Schultze & Weaver (who later designed the Waldorf-Astoria, the Pierre and the Sherry-Netherland Hotels in New York City) to build a concrete structure reinforced with eleven hundred tons of steel. The owners, determined not to miss the upcoming December-to-May social season, employed some twelve hundred construction workers, who completed the hotel in less than a year. Seventy-two Italian artisans were imported to execute the paintings on the ceilings of the lobby and other first-floor public rooms. From its opening day, December 29, 1926, the Breakers was the resort hotel of choice for the American social set, who arrived in private railroad cars, like a flock of exotic birds on their annual migration some for three-to-four month stays. These wealthy guests were accompanied by dozens of steamer trunks, gold-encrusted jewelry cases, lizard-encased golf clubs and a retinue of servants who resided in tiny cubicles equipped with call bells to provide their employers with twenty-four-hour access to their services.

Between the Royal Poinciana and the Palm Beach Inn, Flagler developed a vast park with spectacular landscaping and a miniature railway with cars pulled by donkeys. Serpentine walkways crossed acres of lawn and intersected with hundreds of flower beds and rows of palm trees and Australian pines. In the Roaring Twenties, gentlemen drank bootleg gin and smoked cigars in a gallery overlooking the Circle Dining Room. Guests danced the Charleston until dawn. For a time, a three-to-seven A.M. “nightcap breakfast” was served. But with the stock market crash of 1929, the Breakers’ popularity began to wane. During World War II the hotel was converted to a U.S. Army hospital. The Royal Poinciana was demolished by the Flagler System in 1935.

Following the end of World War II, the Breakers struggled to regain its former opulence. Every spring it closed its doors, the windows were rubbed with soap to keep out the sun, and the furniture was covered with sheets. During the winter season, the room-sized safe, lined with boxes that once held an emperor’s treasure of emeralds, rubies and diamonds, stood empty. In the abandoned gallery, the paintings of nymphs on the ceiling were peeling; the cracked walls still reeked of stale cigar smoke. By 1970, in an effort to enter the modern world, the hotel had added air-conditioning and convention facilities, but it never regained its former glory until the 1990 renovations. The Breakers has long been controlled by the Kenan family, relatives of Mary Lily Kenan, the third wife of Henry Morrison Flagler, and in 1990 they finally committed $75 million to a complete renovation. Among the more recent additions are the Flagler Club, twenty-eight deluxe rooms with special services, including those of a dedicated concierge. There are fourteen tennis courts and two 18-hole golf courses. (The first, completed in 1896, is the oldest in Florida). The Beach Club has a massive pool, a kiddie pool, beach cabanas and an outdoor and an indoor restaurant. Personal trainers, fitness classes and massage are available. 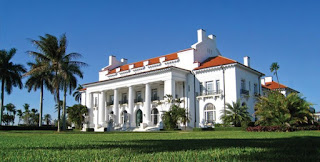 At the age of 70, Henry Flagler built a fabulous Palm Beach mansion, called Whitehall, which was reputed to cost $2.5 million. A reporter for the New York Herald, writing in March 1902, described the mansion as “more wonderful than any palace in Europe, grander and more magnificent than any other private dwelling in the world…. the Taj Mahal of North America.” Whitehall was a wedding present for Flagler’s new bride, Mary Lily Kenan.

In 1925, the Whitehall was sold and the new owners converted it to a hotel with the addition of a new 300-room tower. In 1959, the Whitehall Hotel was reacquired by the Flagler family who demolished the tower and created the Henry Morrison Flagler Museum.

This article has been excerpted with the author’s permission from the book, “Great American Hoteliers: Pioneers of the Hotel Industry” AuthorHouse 2009. The author, Stanley Turkel, is a recognized authority and consultant in the hotel industry. He operates his hotel, hospitality and consulting practice specializing in asset management, operational audits and the effectiveness of hotel franchising agreements and litigation support assignments. Clients are hotel owners, investors and lending institutions. His books include: “Hotel Mavens: Lucius M. Boomer, George C. Boldt and Oscar of the Waldorf,” AuthorHouse 2014, and “”Built To Last: 100+ Year-Old Hotels East of the Mississippi,” AuthorHouse 2013.