The Seychelles capital city of Victoria had a special touch with the added sights and sounds of India over the weekend for the third Seychelles-India Day celebrations.

The Seychelles capital city of Victoria had a special touch with the added sights and sounds of India over the weekend for the third Seychelles-India Day celebrations.

Apart from the variety of tasty Indian dishes available in the food and fun fair in Victoria, enthralling performances from Indian artists ̶ giving the islands a true taste of India ̶ a replica of one of the country’s most famous attractions graced the grounds of Victoria for the four-day event.

The Seychelles-India Day committee explained that the Mysore Palace is a historical palace in the city of Mysore in Karnataka, southern India. It is the official residence and seat of the Wodeyars — the Maharajas of Mysore, the royal family of Mysore, who ruled the princely state from 1350 to 1950.

Vice President Danny Faure had the honor of cutting the ribbon on Saturday night to officially open the palace in front of Stad Popiler. 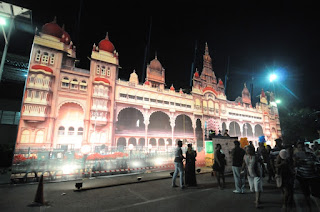 Present at the official opening ceremony were the Designated Minister Vincent Meriton, the Minister for Tourism and Culture Alain St.Ange, Indian High Commissioner Sanjay Panda, members of the Seychelles-India Day committee, and a large crowd of people who were enjoying the fun and food fair in the Stad Popiler car park.

The opening ceremony was followed by a grand show inside Stad Popiler where hundreds of people had gathered to enjoy this once-in-a-lifetime show by top Indian artists from Bollywood.

Those who were there had the chance to enjoy top hits performed by the likes of famous music composer and playback artist Nakash Aziz, Indian actress and playback singer Andrea Jeremiah, and Haricharan. Twin sisters Sakriti and Prakiti Kakkar also gave dazzling performances.

Top Indian dancers from Bollywood had spectacular dance moves to show to the cheering crowd.