Among the Maghreb states, Algeria boasts the longest Mediterranean coastline. Architecture, culture, art and cuisine offer much to would-be tourists.

Among the Maghreb states, Algeria boasts the longest Mediterranean coastline. Architecture, culture, art and cuisine offer much to would-be tourists. For an economy with nearly 40 percent youth unemployment, a weakening currency, and a desire to diversify away from hydrocarbon revenues, a serious push to bring in tourists would seem obvious. But most hotels are expensive and offer poor amenities, and the cash-based economy has poor connectivity to international payment and credit card systems. And as I discovered, dollars are hard to exchange and sometimes refused, so the lesson is to bring euros.

Many Algerians deflect the question of why more foreigners don’t visit Algeria with a litany of different statements — “Morocco and Egypt play up the security situation in Algeria to benefit their own tourist industries,” or “Why would anyone want to come here?” or even “We do have tourists — what are you?” 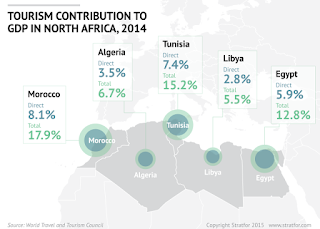 Algeria has thus far resisted becoming too dependent on foreign visitors, and is unwilling to loosen robust controls along the borders to facilitate movements of travelers that could easily obfuscate the movement of terrorists. Tunisia’s security problems and Morocco’s inability to lead the region (from an Algerian perspective) are attributed up to overdependence on Western tourism, or to an inability to rely on themselves or their own resources. But when pressed further, both citizens and government officials will eventually come to a similar conclusion, that in the Algerian mindset, relying on tourism makes you weak. The lessons of Algeria’s past are that the country’s current challenges will only be solved through Algerian strength.

Algiers belongs to the locals. Arriving in Algiers’ Houari Boumediene International Airport, it’s readily apparent that the facility wasn’t designed with tourists in mind. Distractions found in other regional airports, such as high-end shopping, restaurants and souvenir kiosks are absent. Loitering isn’t permitted, let alone encouraged. And security, not traveller comfort, is the primary concern — echoing both Algeria’s decadeslong mistrust of outside interference in domestic affairs as well as the legacy of the 1991-2002 civil war and subsequent jihadist insurgency. Named after the chairman of the Revolutionary Council and the republic’s second president, the airport serves as a clean and utilitarian transit point, facilitating travel to and within Algeria.

Moving through customs, I found I was the only traveler entering without an Algerian passport and on leaving the airport, I was immediately marked as an outsider by one of the several black market moneychangers that lurk around the exits. (Having arrived on an evening flight from Europe, the official exchange office was closed.) In one of the few conversations in English I had in the country, I was offered dinars, arrangements for a taxi, chauffeur service or hotel. He asked if I had arrived on business, and when I responded in French, the man balked a bit. Our interaction ended with the arrival of a policeman who dismissed the moneychanger with a tilt of the head. Though the practice is technically illegal, the officer then called over a different moneychanger and told me he offered better rates.

He then told me to only exchange enough for the taxi ride to my destination in the city. Making the transaction in dollars, not euros, triggered looks of surprise between the moneychanger and the officer. Tourists are rare and Americans, rarer.

The Beating Heart of Algeria

The Algerian government has made significant strides in securing key urban population centers and its borders, especially since the 2013 Ain Amenas attacks. It is easy to forget that the country is still fighting a jihadist insurgency and shares long borders with Tunisia’s unstable western region and Libya. Incongruously, this is a point of pride for many Algerians. National identity is predicated on a few key pillars, the two most salient being the Algerian defeat of the French occupation, and the government’s victory against the jihadists after the civil war. In the six decades since the revolutionary war began, Algeria has experienced several challenges, but has been able to confront them and succeed without outside aid, as Algerians are quick to tell you.