ISLAMABAD, Pakistan – The Federal Information Minister Pervaiz Rasheed has urged the provincial governments to play their due role to promote tourism in the country.

ISLAMABAD, Pakistan – The Federal Information Minister Pervaiz Rasheed has urged the provincial governments to play their due role to promote tourism in the country.

In his address at a seminar on tourism and a photo exhibition held in connection with the World Tourism Day in Rawalpindi on Wednesday, the minister stressed the need for joint efforts by the federal and provincial governments to promote tourism in the country.

The seminar was organized by the Pakistan Tourism Development Corporation (PDTC) at the Flashman’s Hotel, Rawalpindi. World Tourism Day is celebrated worldwide on September 27 each year with an objective to foster awareness among the international community on the importance of tourism and its social, cultural, political, and economic values. 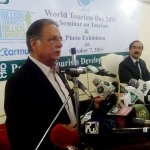 The information minister said that under the 18th constitution amendment, the subject of tourism has been transferred to the federating units. He said that the provincial governments should play their role to promote tourism in the country.

Pervaiz Rasheed said that development of the communication infrastructure including a metro bus service is helping in the promotion of tourism.

The minister said that the present government is also focusing on basic communication infrastructure development for connecting every part of the country with each other. 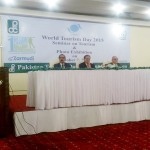 On the occasion, the minister inaugurated a photo exhibition in connection with World Tourism Day.

A large number of people from different walks of life including students from private and public sector educational institutions are visiting the exhibition. The photographs, depicting the country’s lofty mountain peaks, lakes and valleys, customs and cultural aspects, and national heritage have been put on display in the exhibition.

Secretary Cabinet Raja Hassan Abbas in his address said that this year’s theme of World Tourism Day – “1 Billion Tourists, 1 Billion Opportunities” – reflects how much tourism has grown over the years moving a billion people across the globe annually, and how much a community can benefit economically, socially and culturally, from this mass movement of people. After a period of political turmoil, environmental and natural disasters, conflicts and new diseases that have affected tourist movements, we are more confident than ever that tourism in Pakistan has the capacity to successfully address some of the main issues which are at the root of such problems, especially extreme poverty and social harmony. 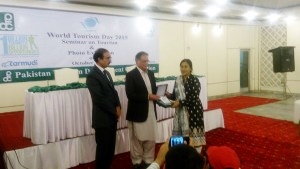 Ch. Kabir Ahmad Khan, Managing Director PTDC, in his welcome address said that World Tourism Day is celebrated every year on September 27 under the theme declared by the UN World Tourism Organization (UNWTO). However, due to Eid holidays, this year we are celebrating it today under the theme “One Billion Tourists – One Billion Opportunities.” Indeed this is the right theme to describe this extraordinary industry which has served whoever has treated it right. He added that there are no two views on the importance of sustainable development of the tourism industry as a major source of a foreign exchange earner, a tool of job creation and poverty alleviation, and above all creating harmony among people from different parts of the country. Its ability to sustain even the poorest in the economic ladder have been proven many times.

He told that PTDC is committed to develop and promote the tourism industry in the country. With a continuous effort of its officers and staff, during the last financial year 2014-15, PTDC’s subsidiaries have increased their revenue, and in coming years, they will soon achieve the target of becoming a self-sustained profitable organization. As an initiative to promote the tourism industry and engage the youth of Pakistan, PTDC in collaboration with the University of Management and Technology Lahore, has launched the “Pakistan Tourism Friends Club.” The members of the club can avail a 20% special discount on room rent at all PTDC motels spread all over Pakistan. He thanked Carmudi Pakistan for their interest in tourism promotion and sponsoring this event.

Former Consultant to the Ministry of Tourism and Honorary President of The Region Initiative (TRI) Agha Iqrar Haroon in his presentation stressed involvement of local communities in tourism planning. He gave an example of the Mitan Responsible Tourism Project Samarkand Uzbekistan where the local community is involved at every level of execution of tourism activities.

The photo exhibition was inaugurated by Senator Pervaiz Rashid, which was visited by a large number of students of universities, colleges and schools, and the general public. The exhibition will remain open until the evening of October 8.

In addition, the information minister also awarded shields and certificates to persons, including senior journalist Agha Iqrar Haroon and Jahan Ara Mueen for their contribution in tourism development in Pakistan.

In a statement after getting the award, Agha Iqrar Haroon expressed happiness and thanked the federal government for acknowledging his services.

“I am happy to get an award for tourism development in Pakistan,” Agha Iqrar Haroon said.

Agha Iqrar Haroon also expressed his resolve to continue to serve the country and work for the promotion of tourism and intercultural harmony in the country.

“I feel privileged that my services for intercultural harmony have been recognized, and the Minister for Heritage awarded me today,” he added.