More than 400 employees of Fraport AG simultaneously performed the symbolic first cut of the spade today, marking the ground-breaking and start of construction for Frankfurt Airport’s new Terminal 3

More than 400 employees of Fraport AG simultaneously performed the symbolic first cut of the spade today, marking the ground-breaking and start of construction for Frankfurt Airport’s new Terminal 3. This symbolic act has set the stage for securing the future competitiveness of Frankfurt Airport and, consequently, new job opportunities in the Frankfurt/Rhine-Main region. The delegation participating in the ceremony included the State of Hesse Prime Minister Volker Bouffier, Frankfurt am Main’s city treasurer Uwe Becker, Fraport AG’s entire executive board and its supervisory board chairman Karlheinz Weimar. The 200 guests in attendance included many leading political and business representatives, such as secretary of state Mathias Samson from the Hessian economics, energy, transport and regional development ministry. 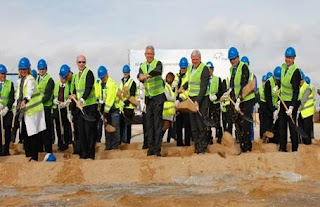 Speaking at the milestone ceremony, Fraport AG’s executive board chairman Dr. Stefan Schulte stated: “Terminal 3 will meet the highest demands for service and quality. As Germany’s most important airport – particularly for intercontinental flights – Frankfurt will be able to continue offering first-class services and modern infrastructure to our passengers and Germany’s export-driven economy. Terminal 3 will also serve as an attractive showcase for the entire Frankfurt/Rhine-Main region. Construction of this outstanding facility will ensure that Frankfurt remains Germany’s Gateway to the World.”

State of Hesse prime minister Volker Bouffier added: “The construction of Terminal 3 is an important step in ensuring Frankfurt Airport’s future viability and, thus, Hesse’s position as a leading economic location in the world. Fraport AG’s massive investment of €2.5 to €3 billion in the new terminal is creating significant added value for the region, which deserves our respect. Furthermore, as one of the largest infrastructure projects in Germany, Terminal 3 will allow Hesse’s Gateway to the World to remain a key global aviation hub, where existing jobs will be strengthened and new ones added. Consequently, Frankfurt Airport will continue to serve as a vital economic engine. The Hesse government remains committed to helping Germany’s largest and most important airport, so that Frankfurt Airport can continue to be beneficial to our economic location – securing many thousands of jobs, while further reducing the airport’s environmental impact on the region.”

The first phase of the innovative and sustainable Terminal 3 complex – which will be able to serve up to 14 million passengers per year – will be erected by 2022 at the south of Frankfurt Airport (FRA). Current passenger capacity in Terminals 1 and 2 will be exceeded soon because of the continuing increase in passenger traffic at the FRA global aviation hub. The challenging Terminal 3 project will require seven years of construction. Therefore, it is paramount to commence the project now. With Terminal 3, the Frankfurt Airport company will elevate its high quality and service requirements to new levels.

At the ground-breaking event, Fraport AG’s supervisory board chairman Karl-Heinz Weimar said: “Our future Terminal 3 will strengthen Frankfurt Airport’s competitive position internationally. With my many years of experience at Fraport, which is regarded as one of the world’s most successful airport operators, I am certain that this ambitious project will be realized on time and on budget. Fraport has tremendous expertise for creating passenger terminals, ranging from Pier A-Plus in Frankfurt to the recently constructed new terminals in St. Petersburg, Varna and Burgas – as well as passenger terminals previously built in Delhi and Antalya.”

The first construction phase, which has officially been launched now, will include the main terminal building and two piers to serve up to 14 million passengers per year. At a later date, two more piers can be added to expand the overall capacity of Terminal 3 to some 25 million passengers per year. By installing a new SkyLine people-mover system to link Terminal 3 with the existing terminals at the north side of FRA, Fraport will ensures the best transfer options and optimal intermodal connections for all passengers and guests.

The spacious Terminal 3 will feature impressive dimensions and architecture. The basic surface area of the new terminal comprises about 90,000 square meters – equivalent to about 19 football fields. The terminal hall has an exterior height of 33 meters and a clear interior height of 20 meters, which promises a unique spatial experience for passengers. The hall will offer space for up to four check-in areas with a total of 104 counters, up to 54 baggage drop-off machines and, initially, some 40 ticket counters – which can be increased depending on future requirements. Terminal 3 will offer 29 security control positions for departing and transfer passengers, and 10 baggage claim belts for arriving passengers.

Continuing the nomination of the existing piers at FRA North, the two new piers at Terminal 3 will be called ‘H’ and ‘J’, which will be 400 and 600 meters long respectively. Encased with glass on both outer sides, the Terminal 3 piers will provide a total of 24 urgently needed aircraft docking positions – including 20 positions designed for wide-body jets like the Airbus A380 superjumbo and the Boeing 747. With a total investment volume of €2.5 to €3 billion, Terminal 3 is a significant infrastructure project that will benefit the local building industry and the Frankfurt/Rhine-Main region.

Dr. Schulte emphasized the importance of the Terminal 3 project: “After more than 15 years of intensive planning, approval and verification, we are today pleased to commence construction of the new Terminal 3 at Frankfurt Airport. This terminal will secure the international competitiveness of Germany’s largest aviation hub, which will result in the creation of new jobs and opportunities for our employees. Furthermore, Terminal 3 will stimulate economic prosperity in the entire Frankfurt region and beyond. Along with our jubilation for the new Terminal 3, we will not lose sight of our role as an international leader in noise abatement. In the years to come, we will not relent with our commitment to noise abatement activities.”