PORT-OF-SPAIN, Trinidad – Outstanding performers in Trinidad and Tobago’s tourism and hospitality industry were honored by the Trinidad Hotels, Restaurants and Tourism Association (THRTA) at the sec

PORT-OF-SPAIN, Trinidad – Outstanding performers in Trinidad and Tobago’s tourism and hospitality industry were honored by the Trinidad Hotels, Restaurants and Tourism Association (THRTA) at the second annual Tourism Gala Awards Dinner and Dance held on September 26th at the Trinidad Hilton and Convention Centre.

During his inspirational address, Mr. Chastanet emphasized the important role tourism plays in the development of a country while Minister Cudjoe, in her maiden address as Minister of Tourism, reiterated the government’s commitment to developing and implementing clear and concise tourism policy objectives in collaboration with all tourism partners. She also indicated her commitment to ensuring the “tourism voice” is heard clearly and strongly in the Cabinet. 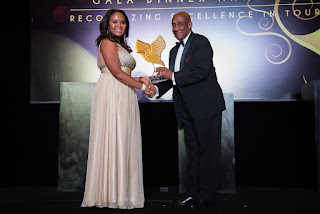 The Trinidad and Tobago Tourism Awards was established by the THRTA to recognize and honor individuals and businesses that have been outstanding performers in Trinidad and Tobago’s hospitality and tourism industry and to promote the THRTA’s belief that service excellence is the industry’s greatest asset.

Awards were presented to winners in six categories including Business Excellence Awards for Tourism Supporting Services and Direct Tourism Services, Employee of the Year Award, Restaurateur of the Year Award, Hotelier of the Year Award (Small) and Hotelier of the Year (Large). Two awardees were also inducted into the Tourism Hall of Fame; Mr. Winston Nanan, posthumously, of Nanan’s Caroni Bird Sanctuary Tours in Trinidad and Mr. John Jefferis, owner and managing director of the Coco Reef Hotel in Tobago; for their substantial and sustained contributions to leadership and service in the hospitality and tourism industry.

A full list of the evening’s winners is detailed below:

Home to the largest Carnival celebration in the Caribbean, Trinidad & Tobago is the southernmost Caribbean nation located seven miles east off the Venezuelan coast. Ranked the happiest nation in the Caribbean by the United Nations’ World Happiness Report, in 2013 and 2015, the destination’s distinct and harmonious blend of cultures, eclectic cuisine and environmental treasures continue to attract travelers of all ages to its shores. Birthplace of the limbo and the world famous steelpan, the only acoustic instrument invented in the 20th century, as well as a diverse mix of monthlyfestivals and events, it’s little wonder that Trinidad is known as the ‘cultural capital of the Caribbean.’ Sister island Tobago offers a quintessential Caribbean vibe with secluded beaches, quaint villages, private villas and award-winning eco attractions. Tobago is home to the largest brain coral in the Western Hemisphere and the oldest protected reserve in the Western hemisphere, The Main Ridge Rainforest. Come and explore Trinidad and Tobago-the true Caribbean!

For more information on upcoming special events and attractions in Trinidad & Tobago visit trinidadandtobago.com or visittobago.gov.tt