In an interview with Der Spiegel, a German daily, she says after graduating college, she worked for a year in an aid center for street children in Rwanda, then traveled all over East Africa. She ended up in Kampala about three years ago, a city she says she “fell in love with instantly.”

One evening in a local Kampala bar, a friend who knew she had a good voice suggested she play something on the guitar and as the saying goes, “the rest was history.” She eventually got a local manager and produced a video in which she sung a ballad in the local language, Luganda, and was celebrated on the radio and in the local culture as a pop star.

In a typical Afro-beat contemporary style, the 22-year-old talks about a love that has gone missing. Not different from the many Ugandan songs in that genre, Deena uses simple metaphors to tell her story. The lyrics are as colorful as they come, even scattered with a few Luganda proverbs; in fact, at the end she even does those studio mentions of “producer so and so.” 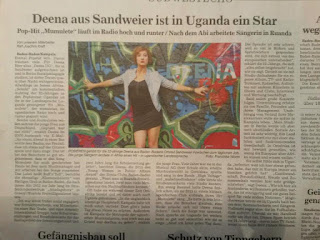 Born in Baden Baden, Germany, Deena refers to herself as a musical diva dedicated to getting the African language heard and celebrated. She thus sings in Luganda, Kinyarwanda, Kiswahili, and English. The biggest surprise about the song titled “Mumuleete” is not the white girl nailing the mother tongue, but the fact that she syncs well with her lyrics and manages to pull off a song better than many local artistes.

She sings in African languages to show how beautiful it would be if everyone expressed themselves in their indigenous tongue. She describes the African talent and languages as “so lovely and unique.”

“Many [non-Africans] can sing in European languages and English, but singing in African indigenous languages is a challenge that most can’t take, so I decided to take it,” she said.

She adds that her biggest inspiration is seeing Africans doing American genres such as hip hop, RnB, reggae, rap, pop, and so on, in English, but forgets how superb and unique it would be singing all that in their local languages. Much as Deena sounds flawless singing Luganda, she is still studying the language but is good at perfecting what is written for her.

She notes that Mumuleete is not simply a one-off; more than three songs are already in the works, all written by Meddie Menz. Her favorite local acts are Mowzey Radio and Weasel, but she is quick to add that she listens to all local stuff.

Her latest facebook post on DEENA-UG reads, “IT’S ABOUT TIME I MEET YOU ALL MY PEOPLE. Come this Friday AT CLUB AMBIANCE and let’s welcome each other and have a good time. Make it a DATE with me. smile emoticon. lol”