PORT OF SPAIN, Trinidad – Bollywood superstar, Kabir Bedi is in Trinidad for the world-premiere of Bazodee the Movie.

PORT OF SPAIN, Trinidad – Bollywood superstar, Kabir Bedi is in Trinidad for the world-premiere of Bazodee the Movie.

Bedi stars alongside Trinidadian soca artiste Machel Montano in the feature film Bazodee, which premieres on September 23rd, 2015. In addition to his busy schedule of public appearances in promotion of the new movie, Bedi graciously accepted the Tourism Development Company’s invitation to tour some places of interest in Trinidad. His itinerary included visits to the Temple in the Sea, the Caroni Bird Sanctuary, the 85 feet-tall Hanuman Murti, the city of Port of Spain and of course, the world-famous Maracas Bay.

Bazodee is one of the films being featured at the Trinidad and Tobago Film Festival 2015. The movie, set in Trinidad, features Machel Montano as Lee, a rugged soca singer who falls in love with Anita, the daughter of Bede’s character, Ram – a secretly deep-in-debt businessman. Anita meets Lee, who is performing at her engagement party and sparks fly. Soon, the two fall in love. Nikhil, Anita’s malevolent, future brother-in-law, notices. Once he discovers the truth about Ram’s finances, he threatens to expose everything, forcing Anita to fight for the wealth that truly matters—love.

Bedi, who has also achieved success in Hollywood and Europe’s film industry, is most noted for his role as the villain Gobinda in the 1983 James Bond film, Octopussy and as Emperor Shah Jahan in the movie Taj Mahal. Since 1982, he has been a voting member of the prestigious Academy of Motion Picture Arts and Sciences, who are responsible for presenting the Oscar awards. He is also a voting member of the Screen Actors Guild. 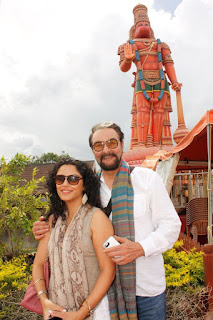 Home to the largest Carnival celebration in the Caribbean, Trinidad & Tobago is the southernmost Caribbean nation located seven miles east off the Venezuelan coast. Ranked the happiest nation in the Caribbean by the United Nations’ World Happiness Report, in 2013 and 2015, the destination’s distinct and harmonious blend of cultures, eclectic cuisine and environmental treasures continue to attract travelers of all ages to its shores. Birthplace of the limbo and the world famous steelpan, the only acoustic instrument invented in the 20th century, as well as a diverse mix of monthlyfestivals and events, it’s little wonder that Trinidad is known as the ‘cultural capital of the Caribbean.’ Sister island Tobago offers a quintessential Caribbean vibe with secluded beaches, quaint villages, private villas and award-winning eco attractions. Tobago is home to the largest brain coral in the Western Hemisphere and the oldest protected reserve in the Western hemisphere, The Main Ridge Rainforest. Come and explore Trinidad and Tobago-the true Caribbean!

For more information on upcoming special events and attractions in Trinidad & Tobago visit trinidadandtobago.com or visittobago.gov.tt