A recent visit to Rwanda’s only savannah national park revealed some intriguing insights into the results of measures taken over the past few years by the Akagera Management Company.

A recent visit to Rwanda’s only savannah national park revealed some intriguing insights into the results of measures taken over the past few years by the Akagera Management Company. In a unique public private partnership, the Rwanda Development Board and African Parks, a conservation management NGO, have joined hands to rebuild the park after years of many challenges and then rebrand it as a premier safari destination within the Rwandan circuit.

The park, one of the oldest in Africa formed in 1934, is today less than half of its original size of once 2,500 square kilometres and has lost crucial game migration routes and wildlife areas under the former regime, for which neither human life nor wildlife appeared to matter much.

Once the boundary fence, some 120 kilometers of electric and conventional fencing, was completed, and then more recently strengthened to make it predator proof, could other planned measures roll out. Among those were the building of a new reception and visitor centre (2013) and the reconstruction of the park headquarters, road and track rehabilitation, the introduction of tourist boats on Lake Ihema (2014), the launch of the Ruzizi Tented Camp last year, which is owned and operated by the park management company and finally the introduction of tracker dogs (2015) aimed to more effectively patrol the perimeter fence and park boundaries. 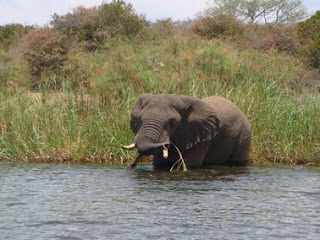 More recently was Akagera in the news when a pride of 7 lions, two male and five female, were translocated from South Africa to the park, returning these predators after an absence of nearly two decades, which are crucial to maintaining an animal population balance in the park. All the lions are collared for 24/7 monitoring and several dominant elephant too have been fitted with satellite transmitters which emit pings at regular intervals to allow the monitoring staff constant updates on location and movement across the park.

Game, while admittedly still less in numbers compared to other main national parks in East Africa, is varied though giving visitors a broad spectrum of animals to see. Besides the recently returned lions are leopard regularly seen as are hyenas, jackals and smaller cats like Serval. Giraffes, zebras, waterbuck, impalas, topis and buffalos, though larger in numbers and easily spotted, are dwarved however by sightings of the rare roan antelope, but those are shy and it takes patience and at times good long distance camera lenses to capture them on film. Other antelope species include klipspringers, duikers, oribi and reedbucks.

Of course is there a growing elephant population resident in the park where plenty of food sources and fresh water – there is a string of lakes found across the entire park – provide a near perfect habitat for them.

Birders will be keen to spot many of the over 500 bird species, resident and migratory, which can be found in the park and watching them from the boat while slowly drifting along the reed grass can be particularly rewarding.

Of particular conservation importance is also the ongoing Crested Crane project which has successfully returned captive cranes into the wild where now over 200 are forming the core of a healthy growing population.

All these efforts have born fruits with growing visitors numbers, and especially Rwandan’s have begun to visit, now making up over half of the overall arrivals at the park gates. It is the level or rising demand for accommodation, which prompted the park management company to establish another small tented camp. The Akagera Karenge Camp, meaning in the local language ‘Little Foot’ or small footprint, comprises only 6 tents and, being non-permanent, will be moved after every season to a new exciting location to reduce the impact on the environment.

As mentioned did the company establish the Rusizi Tented Camp last year, larger and quite permanent of course, and located at the shores of Lake Ihema. Also found in the park is the original Akagera Game Lodge, located on top of the escarpment from where grand vistas across the entire park can be enjoyed by guests.

This all points into the direction that the conservation efforts made by this unique partnership are bearing fruits, supported by hard fact as last year the income did exceed the one million US Dollar mark for the first time. Rwanda, now offering four parks, offers a unique spectrum for visitors, from tracking mountain gorillas, still the predominant income earner for the country, over the two forest national parks of Nyungwe and Gishwati – Mukura to the savannah park of Akagera.

Much work no doubt remains to be done but with security restored – poaching incidents have vastly reduced since African Parks took over the management – are growing game populations just a matter of time. Add to this the unique options, not generally available inside most other national parks across the region, of walking safaris and night game drives and it makes for a winning combination. Remarkable Rwanda indeed!