Travel, tourism and foreign business is under a direct attack in Thailand’s capital, Bangkok. Tourists from several countries are among the dead and injured in last night’s terror bomb attack.

Travel, tourism and foreign business is under a direct attack in Thailand’s capital, Bangkok. Tourists from several countries are among the dead and injured in last night’s terror bomb attack. Many of them were visiting from countries in Asia.

The Thai greeting is to place hands together in a prayer-like position. It’s a standard respect that every Thai shows when driving or walking by the Erawan Shrine.

This shrine is Hindu in origin, but Thais have adopted it as their own. Thai people and tourists from every corner of the world visit this shrine often to pray in respect to the four-faced Buddha. Thais believe that his power will support career, love, and family.

Last night’s deadly terror attack, and the bomb that exploded inside the holy Erawan Shrine in Bangkok was composed of three kilograms of TNT stuffed in a pipe and wrapped with white cloth. Its destructive radius was estimated at 100 meters. This bomb last night killed 9 and injured 123, many taken to the Police General Hospital right across the street from the incident.

The likelihood this terror attack was planned and implemented not by a Buddhist or Thai citizen is a reasonable assumption at this time. The shrine is loved by everyone in Thailand, regardless of what political opinion one has.

This attack was specifically directed against the already fragile travel and tourism industry in the kingdom. The city of Angeles turned into a city of hell last night.

Erawan Shrine is located directly next to the Grand Hyatt Erawan Hotel. The hotel said in a statement: “The safety and security of our guests, colleagues, and neighbors is a top priority. Following news of the explosion, Grand Hyatt Erawan Bangkok opened its doors to allow the public to seek refuge during this tragedy.

“Grand Hyatt Erawan Bangkok is working with authorities during their investigation and will look to see how the hotel can work with relief organizations as the situation unfolds.”

The Skywalk from the Hyatt, the Holiday Inn, the Intercontinental Hotel, and the Erewan Shopping District between the BTS (Skytrain) Chidlom and Siam stations will remain closed until Tuesday.

The Bangkok Metropolitan Administration announced around 10 pm that all 438 city schools would be closed Tuesday for safety reasons.

The Pacific Asia Travel Association has its headquarters in Bangkok about 2 kilometers from the shrine. 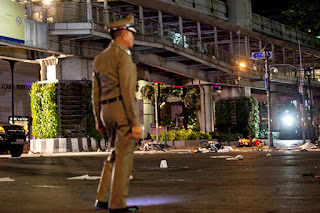 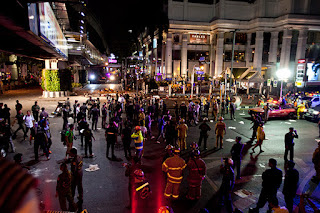 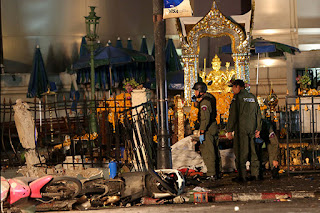 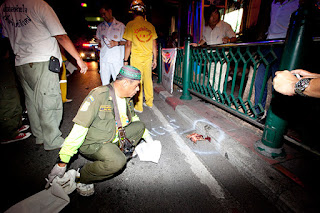 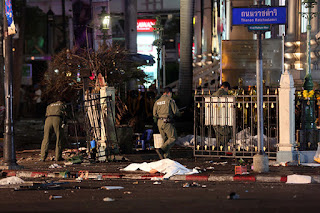 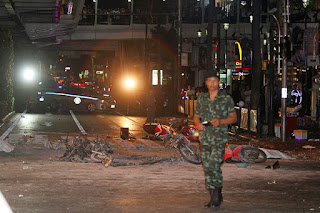 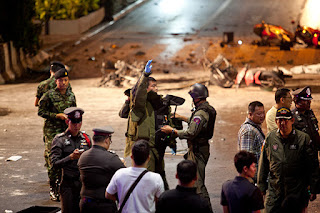 “Following the most recent incident in Bangkok, Thailand, I would like to reassure all members and industry colleagues that all PATA staff and interns are safe and accounted for.

“Everyone here is closely monitoring the situation, and we will make sure to keep you updated on the current situation.

“As a precautionary measure, our office will be closed tomorrow, Tuesday, August 18. All staff will make effort to respond to all emails accordingly.

“On behalf of the Pacific Travel Association (PATA), I would like to thank all those who have sent messages of concern.

“I would also like to convey my sincerest condolences to all those affected by this most recent tragedy. All of us at PATA are deeply shocked and saddened by this recent incident.

“PATA strongly condemns all acts of terror and senseless violence, and our thoughts and prayers are with families and loved ones affected by this terrible incident.”