BANGKOK, Thailand – Thai capital was rocked by an explosion this evening at approximately 19:00.

BANGKOK, Thailand – Thai capital was rocked by an explosion this evening at approximately 19:00. A bomb has exploded outside a Buddhist shrine in central Bangkok, killing at least 16 people and wounding scores more, according to police in the Thai capital.

Two bombs went off, a motorcycle bomb and TNT device placed in the vicinity. A third bomb found at the pillar of the BTS railway opposite the Erawan Shrine was being defused.

Local TV shows chaotic scenes and apparently body parts scattered at the blast site. The attack took place close to the Erawan Shrine in the capital’s central Chidlom district. Probably the best known shrine in the centre of Bangkok. People around the shrine were hit by the full force of the blast. 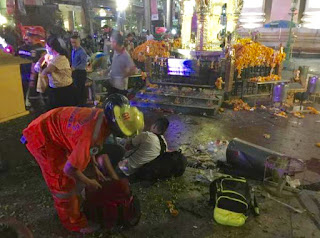 There are body parts and burnt motorbikes scattered on the main road, outside the Erawan shrine in the central Chidlom district, with paramedics and police trying to take the injured away. Police and troops have been deployed at major points around the city.

Police said that 16 people had been killed in the blast, which happened at about 7pm local time (12noon GMT). Thai media said most of the dead and injured were from China or Taiwan. 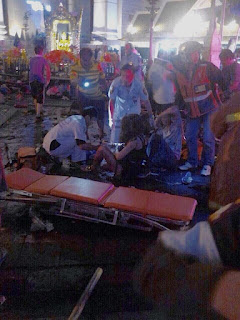 Dozens of ambulances were at the scene and a nearby metro station has been closed. There were unconfirmed reports in Thai media that the death toll has reached at least 27, including four foreigners.

A spokesman for Thailand’s ruling junta said a second bomb at the scene had been found and made safe.

Police with torches have been looking under bushes and walking the grounds of the nearby police station in an apparent effort to search for other bombs. 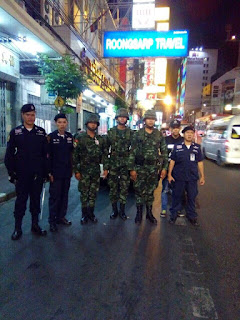 A long line of ambulances has formed outside a hospital located close to the blast site, so many of the injured are being taken to medical centers further away.

There was no immediate claim of responsibility. Thai forces are fighting a low-level Muslim insurgency in the south of the predominantly Buddhist country, although those rebels have rarely launched attacks outside their ethnic Malay heartland.

The country has also been riven for a decade by intense and sometimes violent rivalry between political factions in Bangkok and elsewhere. 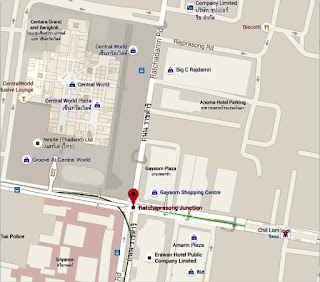 The army has ruled Thailand since May 2014, when it ousted an elected government after months of, at times, violent anti-government protests.

The Erawan shrine, on a busy corner near top hotels, shopping centers and offices, is a major tourist attraction, especially for visitors from east Asia. Many Thai people worship there.

The shrine intersection was the site of months of anti-government protests in 2010 by supporters of the ousted former prime minister Thaksin Shinawatra. Dozens were killed in a military crackdown and a shopping center was set ablaze.