U.S. Department of Commerce Deputy Secretary Bruce Andrews announced today that international visitors spent an estimated $18.7 billion on travel to, and tourism-related activities within, the United States during the month of June, a slight increase when compared to June 2014.

Travel Receipts: Purchases of travel and tourism-related goods and services by international visitors traveling in the United States totaled $11.6 billion during June, an increase of 2 percent when compared to last year. These goods and services include food, lodging, recreation, gifts, entertainment, local transportation in the United States, and other items incidental to foreign travel. Travel receipts accounted for slightly more than 62 percent of total U.S. travel and tourism exports during June 2015. 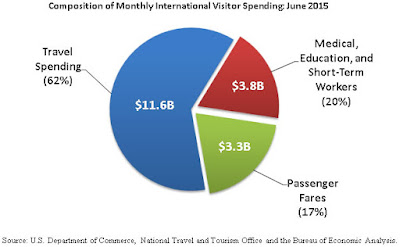 Medical/Education/Short-Term Worker(1): Expenditures for educational and health-related tourism, along with all expenditures by border, seasonal, and other short-term workers, totaled $3.8 billion in June, an increase of 10 percent when compared to the same period last year. Medical tourism, education, and short-term worker receipts accounted for 20 percent of total U.S. travel and tourism exports during June 2015.
Composition of Monthly International Visitor Spending: June 2015

Year-to-date international visitor spending is up 1 percent, totaling $112.2 billion for the first six months of 2015. Conversely, U.S. resident spending abroad is up nearly 7 percent during the same period (January through June), having spent $76.1 billion on imported travel and tourism-related goods and services, resulting in a $36.0 billion trade surplus for travel and tourism year to date.

On June 18, 2015 the Bureau of Economic Analysis (BEA) released annual revisions of the U.S. international transactions data, of which travel and tourism-related spending are a part; as a result, we have revised annual international visitor spending data for 2012, 2013, and 2014.

In 2014 international visitors spent $220.8 billion (revised) experiencing the United States, an increase of 3 percent when compared to the previous year. These travel and tourism exports accounted for 31 percent of all U.S. services exports and 9 percent of all U.S. exports, goods and services alike.