Seychelles has been blessed with its pristine natural beauty, from the magical world lying under its azure ocean, to the majestic sights and sounds of its forests.

Seychelles has been blessed with its pristine natural beauty, from the magical world lying under its azure ocean, to the majestic sights and sounds of its forests. Its islands are the most enchanted, and filled with many beautiful wonders. One of those islands is Bird Island, a portrait of natural beauty.

Tranquility welcomes visitors to the shores of this island, with only the slightest sounds from the leaves of the Casuarina tress and the abundance of palm trees as they sway on the wings of the wind. But further down, Mother Nature plays a beautiful melody in the northern part of Bird Island, one that inspires, de-stresses, and nurtures the soul. The medley of sounds from the bird colony on the island, coming from the thousands of sooty terns as they lay their eggs, and some nurturing their chicks, is like a symphony of nature.

For some birds, peace and relaxation is all they need. Away from the sooty terns’ sanctuary, other seabirds such as the Lesser Noddy known as Kelek in the Creole language, and the Brown Noddy or Makwa as it is called locally, prefer to enjoy the shady areas. 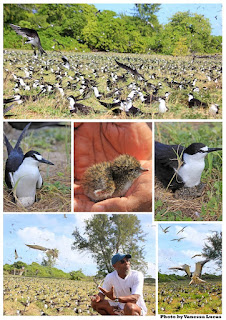 When close to these birds, one can instantly understand why the Lessser Noddy and the Brown Noddy have been given these names ̶ Makwa and Kelek.

They have been named after the sounds that they make.

The Brown Noddy is the third common bird on the island, among the 30 species of birds that can be seen there.

Roby Bresson, the conservationist who has been on Bird Island for 11 years, guides visitors around and shares his passion of conserving and preserving this small slice of heaven in the middle of the Indian Ocean.

A dedicated conservationist, Roby has spent four decades in conservation, working on Cousine and Cousin islands before coming down to Bird Island.

It is enthralling to see how Roby knows so much about these feathery visitors that flock to the island for their breeding season.

The Lesser Noddy and Brown Noddy are both seabirds, but they are different in so many ways, not only in appearance but also where they choose to build their nests. The Lesser Noddy is amazingly beautiful, with the colors of its feathers displaying various shades of grey, from light to dark. It is smaller than the Brown Noddy and has a longer beak.

Compared to land birds which can live up to 20 years, seabirds can enjoy their special treats from the ocean, soar the blue skies, and rest when need for over three decades and even up to 55 years.

These land birds are joined at the start of the month of May, as sea birds fly to the island, traveling as far as crossing the Atlantic Ocean to land on Bird Island.

The nesting season, which is during the period June to July is a must-see, when all these sooty terns find the perfect spot on the green pastures on the northern part of the island to lay their eggs, while the Lesser Noddy birds build their temporary homes in dried trees.

After spending a few months on land, nesting and waiting for their eggs to hatch, the sea calls them back, and they leave in September, until the following year. The chicks leave their parents’ sides after a period of two-and-a-half months, and they become a mature seabird after six years.

The sooty tern colony has been on the island for years, even before the Bird Island Limited Company under the leadership of Guy Savy bought the island.

Mr. Savy and his team has been devoted in keeping this natural treasure, conserving it year after year, turning it into a main attraction on the island.

Conserving the sooty tern colony and giving visitors the chance to experience living in peace with nature have been the aims of Mr. Savy, and these have been well attained.

This small coraline island offers a unique experience of appreciating nature and getting a true taste of tranquility. A stay on Bird Island is the best treat one can give to the mind, body, and soul. The cool breeze from the sea at night, blending with the serenity of the island, can give guests the most peaceful night of their lives.

During the day, visitors to Bird Island can get the rare chance to see thousands of birds as these flying beauties live their lives, without being scared off or disturbed.

A bird is said to be a symbol of freedom, and freedom is what they get on Bird Island.

Seychelles is a founding member of the International Coalition of Tourism Partners (ICTP) .