In a large demonstration thousands of native Hawaiian protesters marched in a peaceful show of frustration on a number of issues.

One was Mauna Kea, Hawaii: According to Hawaiian beliefs, the Mauna Kea mountain on the big Island of Hawaii is Hawaii’s most sacred mountain and a place to worship. Since 1968 when the University of Hawaii (UH) proposed its first telescope on Mauna Kea, Hawaiians tried to use the “legal system” to protest the growing number of telescopes on Mauna Kea. Throughout this process they claim to have been treated with arrogance and disrespect. 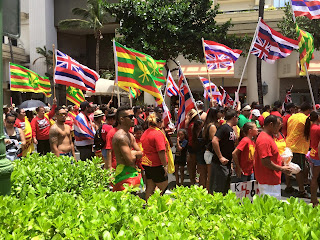 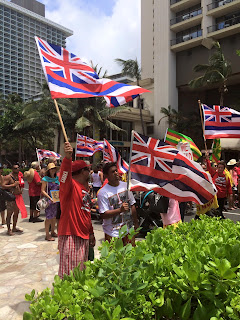 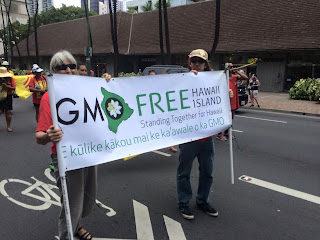 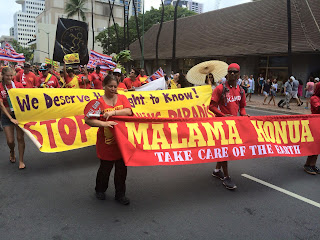 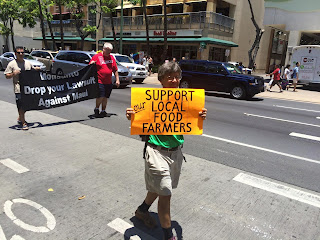 In March 2015 hundreds of people, largely young Hawaiians blocked the road to the summit of Mauna Kea to prevent construction crews from building another 16 story Thirty Meter Telescope. 31 protesters were arrested, but others refused to leave and instead expanded the struggle. The State and the media waged a vicious campaign of lies and distortions, alleging the struggle to be religious vs. science in an effort to divide potential supporters. This is not a struggle against science. It’s a struggle for respect for indigenous beliefs, and respect for the Hawaiian land.

Hawaiians further claim the UH has been free to trash the summit with outdated and unused telescopes and piles of junked equipment. New laws are enacted to prevent demonstrators from continuing the protest while UH and the State repeatedly violate agreements and laws. in the face of determined protests, the movement is threatened with the mobilization of the National Guard.

The group claims the United States is a capitalist imperialistic system that is racist to the core. It is profoundly threatened by the just struggles of oppressed peoples everywhere- whether on the streets of Feguson or New York, in Hawaii or in Palestine. In these struggles there are only two sides.

The group is asking “Which side are you on?” “The side with the oppressed who are rising up? Or with the racist system?”

The stop mass incarceration network has called for three days of action to stop police terror from October 22-24, culminating in a huge march in New York on October 24.

Hawaii has the 4th largest number of murders by police per caita in the entire U.S. Most of the victims are Pacific Islanders.