Exactly one year from the opening of the 2016 Olympic Games in Rio de Janeiro, Embratur (Brazilian Tourism Board) was on air on the Today Show to officially invite tourists from around the world to co

Exactly one year from the opening of the 2016 Olympic Games in Rio de Janeiro, Embratur (Brazilian Tourism Board) was on air on the Today Show to officially invite tourists from around the world to come to Brazil for next year’s mega event. The show, which aired in the US this morning (Wednesday, August 5th), featured live and pre-recorded participation by the President of the Brazilian Tourism Board, Vinicius Lummertz.

From the top of Sugar Loaf Mountain, Lummertz said that Brazil is ready to repeat the success of the 2014 World Cup. Visitors should expect to get to the Olympics venues with efficient transportation, hotels of the outmost quality, safety and of course, Rio’s well-known hospitality. “Rio de Janeiro is a city that connects people. It will be a great experience for those who come and everyone will once again be very impressed,” said the Mr. Lummertz.

The Today Show filmed the main sights of the state capital, such as Corcovado, Sugar Loaf, Maracana Stadium (night shot with Natalie) and the beaches of the South Zone of Rio. The infrastructure works for the Games were also filmed and highlighted during the broadcast.

During a live segment, from Copacabana beach, the president of Embratur invited tourists worldwide to visit Brazil in 2016. “We are prepared to make the best Olympics ever. Everyone should come. See you next year!” said Lummertz, toasting with Natalie Morales. 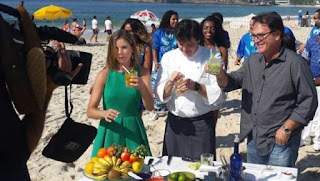 Saturday (August 8), there will be an event celebrating Brazil Day in London. In partnership with the Embassy of Brazil, Embratur will support the festival, which takes place in Trafalgar Square. The event, which will promote Brazil and Rio de Janeiro, will have live shows and interactive sports activities open to the public. Brazilian cuisine will be featured in typical Rio’s waterfront kiosks.

During the Milan Expo, which runs until October 31, there will also be activities focusing on Rio 2016 Games. Embratur will hand out an interactive totem, in the Brazil pavilion, in which the user chooses representative ingredients of Brazilian regional cuisine and have access to tourist information for several Brazilian cities, highlighting some of the cities that will host Olympic Soccer Games. To maintain future contact, visitors will receive the final recipe and tourist information via e-mail, reinforcing the issue of sustainability.

As it happened during IMEX Frankfurt this past May, Embratur plans to hold a morning street race this fall during IMEX America in Las Vegas. Along the way, the tourism board will have booths promoting not only Rio, but also the whole country as an Olympic destination.

Between the second half of 2015 and the first half of 2016, Embratur will be launch the project “Visit Brazil Olympic”, an endeavor with specific promotional events and with the goal to attract tourism investment in priority markets.

With its spectacular beaches, lush rainforests, rich culture, exotic cuisine and exciting nightlife, Brazil is one of the most compelling countries to visit today. Travelers are invited to explore Brazil’s incredible geographical diversity – from the wetlands to the beaches. With a beautiful, tropical climate, Brazil is an easily accessible, exotic get-away for couples, families and business travelers.