Wahiawa is a small country town of around 18,000 residents that tourists pass through every day on their way to the famous North Shore in Hawaii.

Wahiawa is a small country town of around 18,000 residents that tourists pass through every day on their way to the famous North Shore in Hawaii. Mostly just a place to drive through as visitors head to the famous beaches on the island of Oahu, right now it is surely not to be missed, as it is filled with smoke and flying ash from two major brush fires.

An initial brush fire began on Saturday in the hills of Wahiawa known simply as the “heights” about a mile away from the highest homes in the area. The fire was burning in a deep ridge, making it difficult for firefighters to reach, so efforts to douse the flames had to be done by helicopters carrying loads of water.

Strong tradewinds, however, fanned the flames and increased the power of the fire, which has so far scorched at least 300 acres of the area known as the Ewa Forest Reserve and spreading into military land belonging to Schofield Army Base. The following day, a new brush fire also began, hopping over even closer to homes in the quiet little town. 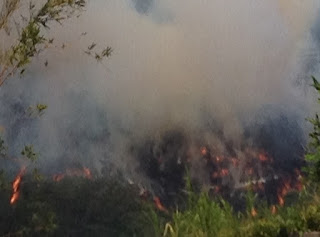 So far 14 fire companies have been on the scene along with 3 helicopters and 43 personnel. Flames are visible from some of the homes, and a mandatory evacuation was ordered along some of the roads in the area due to potential fire and smoke inhalation.

The evacuation area consists of residences on Puninoni Street, Puninoni Place, Nonohe Street, and Nonohe Place. Wahiawa District Park is now serving as a shelter for the evacuees.

It was also reported that today, Monday, August 3, 2015, yet another brush fire has erupted on the other side of Wahiawa, a town ironically surrounded on three sides by a man-made reservoir – Lake Wilson – developed for farming activities, especially during the heydays of the Dole pineapple plantations. To get into and out of Wahiawa, one must travel over one of two (or both) bridges.

According to reports, the fire is visible to drivers along a portion of the freeway that heads into the town. 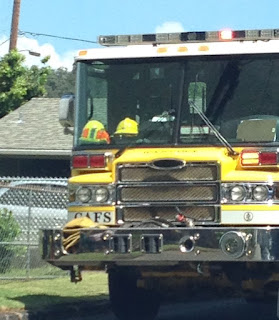 Wahiawa is located on the central plateau of Oahu between the island’s two mountain ranges – the Waianae range to the west and Koolau range to the east. Its name means “place of noise,” as it is said that in ancient Hawaii, before the development of modern-day things that drown out the sounds of nature, like cars and electricity, one could hear the roar of the ocean as the sound traveled between the two mountain ranges.