Tourists and New Yorkers were in for some special excitement and a treat in Manhattan tonight.

Tourists and New Yorkers were in for some special excitement and a treat in Manhattan tonight. Racing Extinction lit up the tallest building in New York with a giant ape climbing the Empire State Building. A snow leopard, golden lion tamarin, and manta rays spanned 33 floors of the building tonight.

It wasn’t King Kong, but founded by filmmaker Louis Psihoyos, the Oceanic Preservation Society teamed up with San Francisco-based Obscura Digital to project the moving images onto the New York Manhattan landmark building.

It’s to get world attention to endangered animals.

The timing of tonight’s event, which has been three years in the making, happens to coincide with a news event about another animal imperiled by humans. Conservationists, including Jane Goodall, have been expressing their outrage at the killing of a beloved lion in Zimbabwe named Cecil by an American dentist with a penchant for big-game hunting. 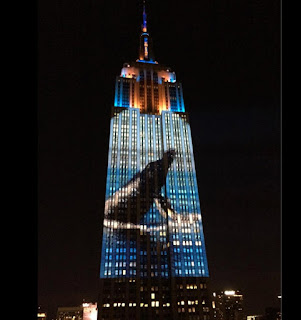 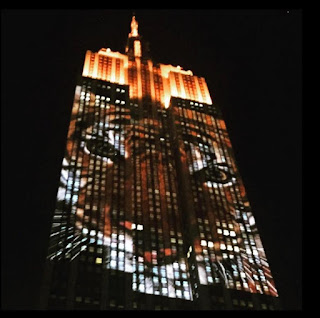 Racing Extinction wants you to stand up and be heard.

Spectators beyond New York were also be able to catch the show live on streaming video. Thousands of tweets and social media sharings added to the audience.