This is the solution for a problem in paradise.

This is the solution for a problem in paradise. What about hundreds of homeless people marching to Waikiki, dropping their clothes in the sand on Waikiki beach, and walking on Kalakaua Avenue in the nude?

Here is what happened earlier today on a nice Sunday afternoon on Oahu.

It certainly wasn’t for his sexual pleasure, but on Kamehameha Highway on the Island of Oahu, Hawaii, this nude man calmly walked on the sidewalk for about one mile before six Honolulu police cars with flashing blue lights stopped and overpowered him. He was put in the backseat of the super clean police cruiser and shipped off to luxury.

What is the law in the US state of Hawaii for anyone walking nude on a major highway or on a state beach?

The law says: A person commits the offense of indecent exposure if the person intentionally exposes the person’s genitals to a person to whom the person is not married under circumstances in which the actor’s conduct is likely to cause affront.

The homeless problem in this U.S. Paradise State and world class travel and tourism destination is experiencing an interesting turn of a response.

City ordinances are now established to chase most homeless people from one spot to another in Waikiki or elsewhere on the island. Homeless often carry all belongings in a shopping card. Many times these shopping cards get confiscated by authorities, leaving the person with absolutely nothing.

Public toilets and showers on Hawaii’s prestige white sandy beaches are usually so filthy by 10 am, a tourist would not want to use them unless it’s an absolute emergency.

Not only tourists are frustrated. Many may consider a different island paradise for their next vacation.

Homeless people are frustrated as well. No food and no place to take a shower, no bed to sleep in. Getting pushed from one street corner to another. Being forced to change location every night is driving some homeless to become mentally unstable. Everyone sometimes needs a good night sleep. Public housing and assistance is hardly available. Some churches or private charities organize hand outs on a volunteer and sporadic basis.

This is a daily struggle in this Pacific Island Holiday Destination where the average hotel room costs about $300.00 a night, not including meals.

If you’re homeless and want a good night sleep and some nutritious food what would you do?

It appears there is a new trend in Hawaii, created by the victims directly.

Homeless are not criminals for the most part. They are often lonely people, many are families and people like you and me. They often have small children. Many got into the situation due to health issues they could not handle, a job situation or unaffordable housing and credit problems. Some are ex-felons, many are drug addicts, alcoholics or are mentally ill. Once you’re camping out on Hawaii’s beaches or riverbeds, there is hardly any escape. Finding professional and free counseling or help in Hawaii – forget it.

Robbing and stealing is not good. Robbing a store can get a person into prison for years. It will make you a felon.

Smart homeless people may have found a solution. What about walking nude on a public sidewalk? It’s a sure call for help, and you don’t even have to dial 911. It’s just a matter of minutes for a police car to spot you and take you to jail.

Once in jail there is a hot and clean shower waiting for you. You have a right to receive three warm meals a day. You will sleep on a fairly comfortable bed, sheets and a pillow included. You will get some clean clothes, toothpaste, toothbrush, a comb, shampoo and soap, sometimes even conditioner, and of course men can shave. A free haircut also may sound appealing for many.

It really is a lot better than food from a garbage can or sleeping on a shopping bag or a wet river bank, and no place to clean up.

If one is lucky enough this luxury treatment could last for weeks and in repeat cases up to 6 months … not too bad!

At the end of your stay you will receive new clothes since you were arrested with nothing. Sometimes the State will even give you some good bye money. Most likely you will also be assigned a social worker to coach you a little and organize some real assistance.

This may be the solution for our many years of homeless people in Hawaii.

Hawaii has no money to take care of the homeless, but record tax revenue is collected. The State is about to return Federal Highway money, because they don’t know how to spend it. Homeless people are adults, children, straight or gay people, god fearing people or humans not believing in anything or anyone anymore.

Homeless include retired people, veterans. Some even have a job, but not enough money, or just bad credit prevents them to qualify for an apartment rental. Hawaii is a state where people are forced to find room-mates due to extremely high rent.

Unless you’re lucky enough to get a space inside a public shelter for a night, you sleep on cardboards, on paper bags, on river beds or if lucky on a park bench.

If you still have a car, you can sleep in your car, but even this is illegal in most places. You do have to make sure your registration is current and insurance is up to date. I know, it’s expensive, but you don’t want the police to confiscate your vehicle?

Hawaii is a wealthy State, it has a Democratic government committed to help those that cannot help themselves. Hawaii has the Aloha spirit. The chief of staff and the governor are good examples mentioning this magic word whenever possible.

This smart nude homeless guy I saw today on Kam Highway in Mililani figured it out.

There is money to fund our jails and prisons. This is no difference for Hawaii compared to any other U.S. State where people get locked up in record numbers. Welcome to the underworld in paradise!

I hope the idea of walking nude will spread like wildfire in the Hawaii’s homeless community. This may be the solution and a wake up call for politicians to do the right thing.

This is why an out of the box initiative by homeless people to march to Waikiki and walk on Kalakaua Avenue in the nude may be the start of a real solution. Kalakaua Ave in Waikiki is our main oceanfront beach road home with designer stores, luxury hotels and restaurants.

Drop everything in the sand and walk in the nude, what an idea? HPD (Honolulu Police Department) busses will transport nude suspects to jail. Every offender can be looking forward to a hot meal and comfortable bed.

Tourists will tweet this by the thousands and Facebook memories for the Aloha State will include homeless people getting arrested in the nude. Our politicians, leaders of the Hawaii tourism industry will learn and spend the money necessary to once and for all resolve the homeless issue in our State. eTN will certainly report about it. 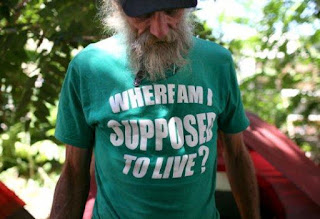 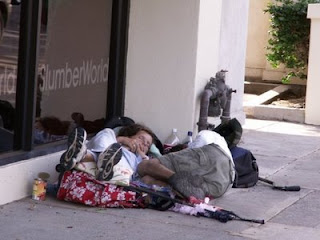 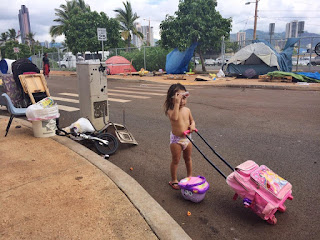 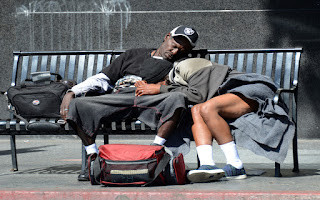 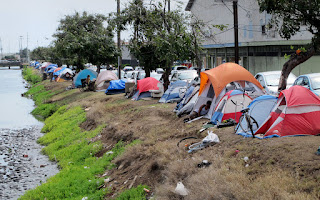 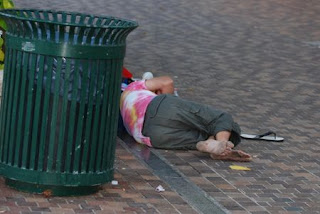 Of course I know this is all wishful thinking – may be?

Here is another idea how Hawaii could learn from the Europeans.
Encourage homeless or unemployed people to start their own cleaning business taking care of bathroom and shower facilities on our beaches and parks. It would generate income for those needing it the most, and tips should encourage these new proud business owners to do a great job. It would also generate taxes that could be used to help others. For example helping homeless kids and youth.

When eTN asked officials the response was: Not here in Hawaii we have the Unions.