The Cosmopolitan of Las Vegas issued a statement on the pool fire: “We can confirm that the fire at Bamboo Pool has been put out with no serious injuries. Guest and CoStar safety is our first priority.”

Unconfirmed reports say a cigarette thrown down by a guest on the upper floor may have caused the fire to start.

“It’s right outside my room, oh my God.” While hearing the sirens in the background and in their rooms to alert hotel guests to evacuate The Cosmopolitan Resort and Casino in Las Vegas, many tourists staying at the hotel are confused what to do. The hotel is on fire at this time. Hundreds of visitors and hotel guests are running away from a swimming pool of the Cosmopolitan Hotel in Las Vegas, Nevada where thick smoke is spreading. The Entrance to the Bamboo Pool at Cosmo pool is located on the 14th floor of this massive hotel building.

How many people were injured is unclear at this time. At least two people are suffering burnings.

Across the Strip from Planet Hollywood, this chic casino hotel has views of the adjacent Bellagio fountains. 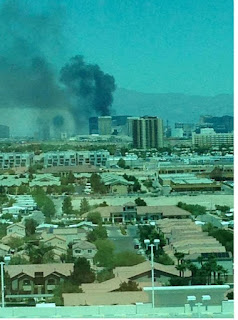 The fire department confirmed a fire at The Cosmopolitan of Las Vegas. Clark County fire crews are on the scene according to the department’s fire alarm site. Latest report say the firs is now contained around the pool area.

Las Vegas Blvd North and South closed from Tropicana to Flamingo due to fire at the Cosmopolitan. Drivers urged to use other routes – a nightmare is developing on Las Vegas busy weekend streets.

Thick smoke clouds are seen everywhere in Sin City and is becoming a tourist attraction.

It appears from photos the fire is spreading from one of the swimming pool deck areas: 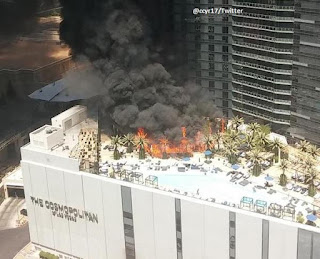 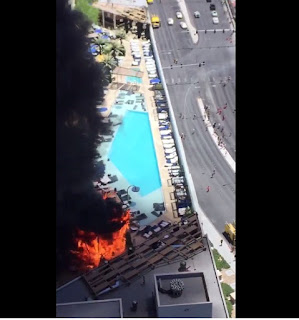 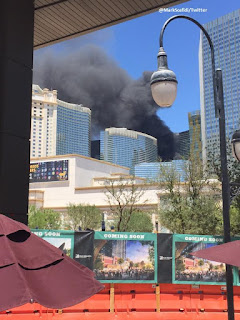 Amenities at the hotel include an outdoor performance venue, a serene spa and hammam, 3 pools, a casino, a wedding chapel, a dog-friendly park and several bars and restaurants, including a lobby bar set inside a 3-story crystal chandelier.