Flight bookings to South Korea have plummeted following an outbreak of MERS (Middle East Respiratory Syndrome), according to latest figures from ForwardKeys which monitors future travel patterns by an

The first case in South Korea of MERS, a virus which produces cold-like symptoms including fever, cough and breathing difficulties, was reported on May 20, 2015.

Olivier Jager, Co-founder and CEO, ForwardKeys, said: “The MERS outbreak in South Korea seems to be having an immediate impact, creating a climate of panic for those with imminent travel plans. International air reservations reacted within five days of the first reported case of MERS in South Korea. After 1 June, we saw steeper drops in bookings and increases in cancellations.

“Obviously, we will continue to monitor bookings activity in the area closely, to keep the industry up to date with the latest developments.”

Variation of Total Reservations vs. the Same Period 2014 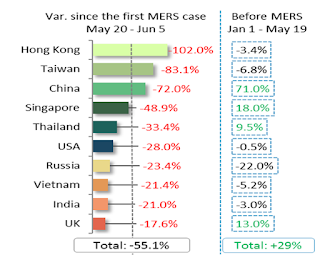 Hardest hit were flight reservations from Hong Kong – down 102% for the same period last year, based on net weekly bookings (ie: bookings – cancellations). 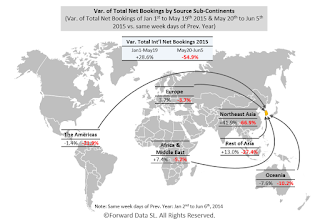