It’s official, skies with American Airlines aircraft may be dangerous and the airline did put profit over safety.

It’s official, skies with American Airlines aircraft may be dangerous and the airline did put profit over safety. This is according to an investigation concluded by the US Deparrtment of Transportation, Federal Aviation Administration (FAA)

eTurboNews had reported about this issue in February:

Vincent L Murrau II, Manager, Audit and Analysis Branch of the the US Department of Transportation, Federal Aviation Administration answered on March 25, 2015. His letter was addressed to Le Seham, Council for The Transport Workers Union of America:

The FAA’s Flight Standards Service has completed their investigation of your air carrier safety alllegation in case #EWB15504. The investigation substantiated that a violation of any order, regulations or standard of the FAA related to air carrier safety occured. Accordingly, the FAA is taking appropriate corrective and/or enforcement action. Our office will nmonitor these actions until complete.

Please note the FAA’s disposition of safety issues outlined in your conplaint is independent of any investigation the Department of Labor may be conducting into your allegations of discrimination.

Thank you for bringing this matter to our attention.

On April 28, 2015 Attorney Lee Seham submitted the following letter to Investigator Shawn H. Huges. of the US Department of Labor:

The Complaint’s unrebutted allegations and evidence describe a management maintenance policy that amounts to this: “yes, we know that our planes are unairworthy, but if you continue to report this to us, you will all lose your jobs.” Not surprisingly, the Federal Aviation Administration (FAA) has found that the degraded maintenance culture at American Airlines has resulted in a disregard of federal aviation standards.

In this context, AA’s position statement of March 20, 2015, leaves us with slackened jaws. The response goes beyond evasion and deceit; if the author had signed it under oath today, she might well be subject to a charge of perjury. The truth is that AA’s recent history reflects a persistent, and well documented, disregard o f federal aviation standards.

On May 31, 2013, as a direct result of the carrier’s systemic disregard of safe practices, a federal court ordered the adoption of a settlement agreement with the Federal Aviation Administration (FAA) requiring AA to engage in “remedial” training and commit to regulatory compliance. With the ink hardly dry on the FAA/AA settlement, its terms are being honored in the breach.

Five days after AA submitted its March 20*^ position statement, the FAA issued a letter stating that its own investigation of the Complainants’ allegations “substantiated that a violation of an order, regulation or standard of the FAA related to air carrier safety occurred.”

Nevertheless, AA asks the Department o f Labor to uphold the carrier’s right” to threaten the Aviation Maintenance Technicians (AMTs) who brought these violations to the FAA’s attention with the loss of their jobs. 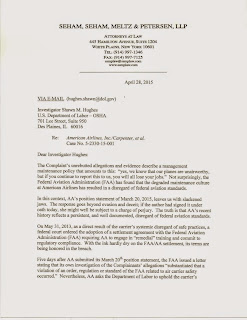 By letter dated January 27, 2015 to the Federal Aviation Administration, Mr. Lee requested access to all records and reports prepared by the
FAA (including investigation reports) within the preceding 60 days concerning the FAA’s investigation of American Airlines’ maintenance practices.

FAA refused to release records on the basis for the exemption is the Regional Administrator’s statement that “the records  are part of an ongoing investigation into an alleged violation of the Code of Federal Regulations.”


On May 6, 2015 Attorneys of the plaintiff appealed the decision of the FAA.
Click here to read both letters. 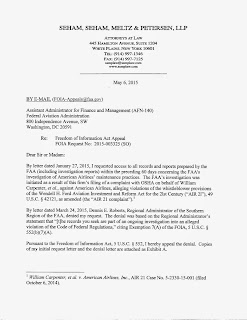