The FAA letter shown on eTN yesterday comes on the heels of a characterization of the Local 591 lawsuit as “frivolous” by AA Chief Operating Officer Robert Isom and American’s insistence that FAA oversight teams had not alerted Isom of “any critical concerns or issues.”

Lee Seham, the lead attorney in the Union’s litigation against American Airlines told eTN: “Any fair-minded person would conclude that credibility of Isom and Rodriguez is in tatters. If American cares about safety, they need to either fire Evita or tell her she has to re-assemble the same technicians she spoke to before and let them know that, when they see burn marks or charred metal, they need to initiate a lightning strike inspection.”

Similarly, American’s dramatic revisions to its lightning strike work cards come on the heels of the lawsuit’s allegations that AA Regional Maintenance Director Evita Rodriguez advised AMTs that they should “not initiate aircraft lightning strike inspections based on their detection of lightning strike damage in the course of their assigned work.” 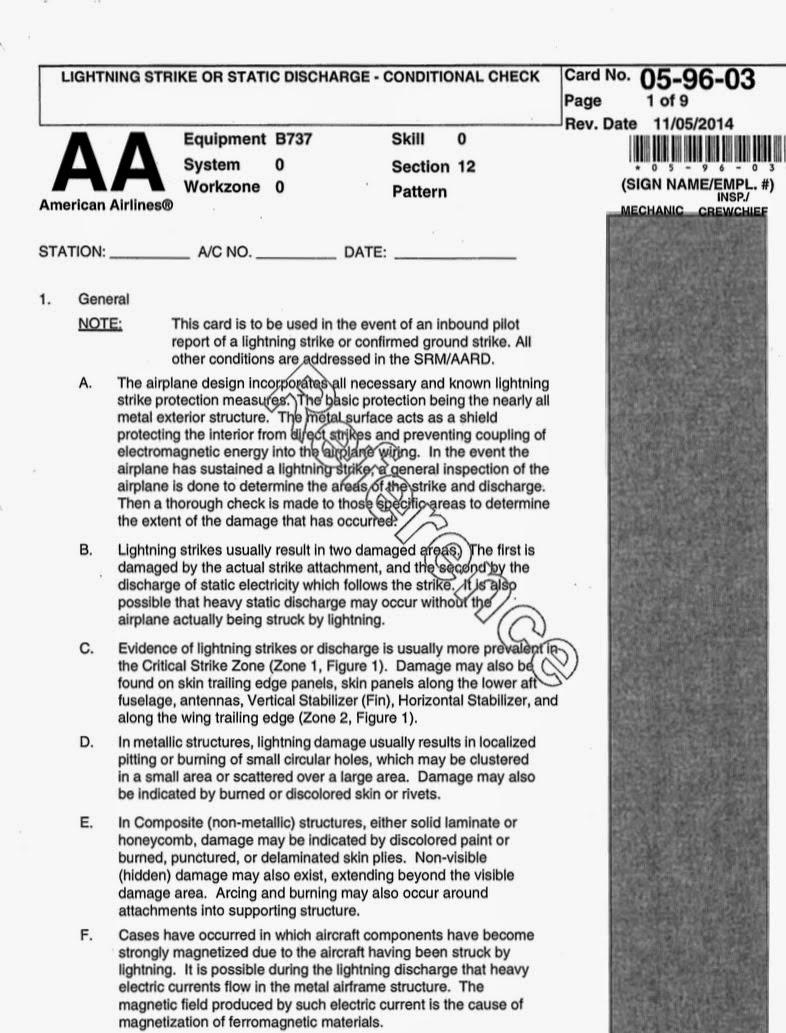 On February 17, Gary Peterson of the Transport Workers Union of America wrote to the American Airlines CEO summarizing the situation on hand. 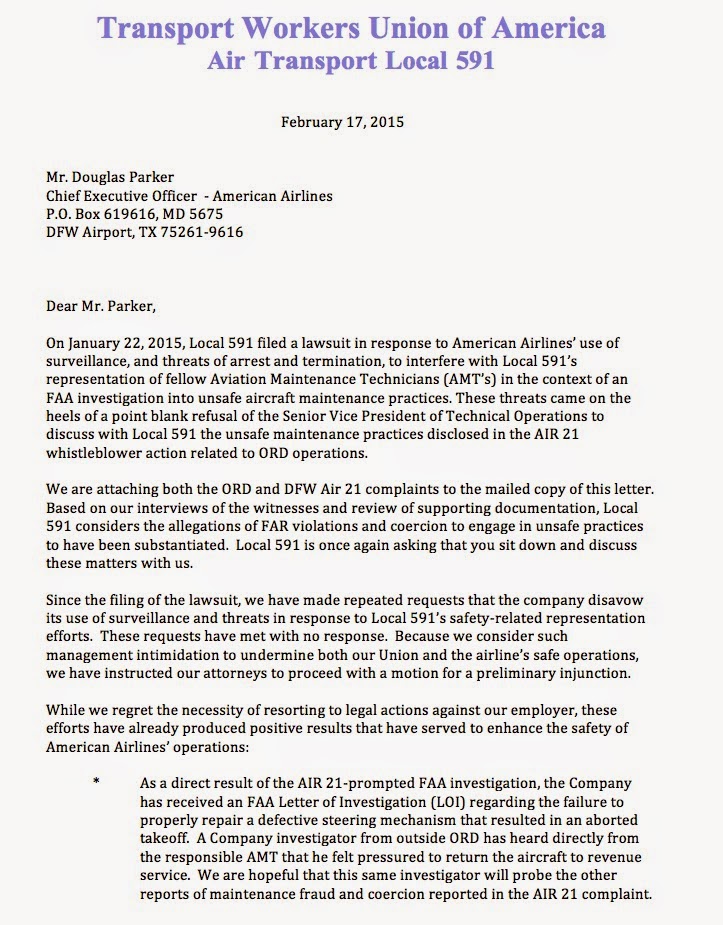 On January 22, 2015, Local 591 filed a lawsuit in response to American Airlines’ use of surveillance, and threats of arrest and termination, to interfere with Local 591’s representation of fellow Aviation Maintenance Technicians (AMT’s) in the context of an FAA investigation into unsafe aircraft maintenance practices. These threats came on the heels of a point blank refusal of the Senior Vice President of Technical Operations to discuss with Local 591 the unsafe maintenance practices disclosed in the AIR 21 whistleblower action related to ORD (Chicago O’Hare Airport) operations.

We are attaching both the ORD (Chicago O’Hare Airport) operations and DFW (Dallas Forth Worth) Air 21 complaints to the mailed copy of this letter. Based on our interviews of the witnesses and review of supporting documentation, Local 591 considers the allegations of FAR violations and coercion to engage in unsafe practices to have been substantiated. Local 591 is once again asking that you sit down and discuss these matters with us.

Since the filing of the lawsuit, we have made repeated requests that the company disavow its use of surveillance and threats in response to Local 591’s safety-related representation efforts. These requests have met with no response. Because we consider such management intimidation to undermine both our Union and the airline’s safe operations, we have instructed our attorneys to proceed with a motion for a preliminary injunction.

While we regret the necessity of resorting to legal actions against our employer, these efforts have already produced positive results that have served to enhance the safety of American Airlines’ operations:

* As a direct result of the AIR 21-prompted FAA investigation, the Company (American Airlines) has received an FAA Letter of Investigation (LOI) regarding the failure to properly repair a defective steering mechanism that resulted in an aborted takeoff. A Company investigator from outside ORD has heard directly from the responsible AMT that he felt pressured to return the aircraft to revenue service. We are hopeful that this same investigator will probe the other reports of maintenance fraud and coercion reported in the AIR 21 complaint.

* In a letter dated January 29, 2015, the FAA’s American Certificate Management Office (CMO), responded to plaintiff Local 591’s complaint that AA had violated the FARs by the manner in which it decided to (1) remove Quality Control from the responsibility of the wide body B-Checks and (2) remove inspectors from the wide body B-Checks. The CMO’s letter concluded that: “As a result of our investigation, we have determined a violation of the Code of Federal Regulations may have occurred. This office will continue to investigate this possible violation and will take the necessary corrective action.”

* On January 30, 2015, the Company issued a revised version of the B737 Lightning Strike or State Discharge card number 05-96-03, which deleted language that had been used by ORD management to effectively eliminate AMT initiated lightning strike inspections. The revisions appear to be a direct response to the federal complaint’s allegations that Regional Maintenance Director Evita Rodriguez implemented a policy of pressuring AMTs to refrain from calling for lightning strike inspections, even where they had detected lightning strike damage. In order to undo the harm she has caused, we call upon Ms. Rodriguez to assemble the ORD AMTs, explain to them the revisions to the card, and disavow her prior instructions.

On the date of the lawsuit’s filing, Company spokesmen represented that they had received no communication from the FAA regarding aviation maintenance issues of concern. While it is hard to believe those statements were truthful at the time, if that same statement were to be reiterated today, it would be a flat lie.

The number of FAA investigators assigned to the ORD and DFW AIR 21 complaints has now increased to six. As additional LOIs are received from the FAA – and they will be if the agency is doing its job – we ask you to instruct your subordinates to disclose the nature of the safety violations and work with the President and Vice President of Local 591 to remediate the situation.

These recent developments not only confirm the importance of Local 591’s legal efforts, but also confirm the irresponsible nature of media statements to which you and your AMTs may have been exposed. For example, a local Dallas TV station broadcast a statement from a consultant – with little or no aviation maintenance experience – that the federal lawsuit reflected union “thug tactics.” An equally unqualified analyst from Cowen & Company characterized our federal action as a “seemingly frivolous lawsuit” and, unfortunately, AA’s EVP of Corporate Affairs readily agreed.

Unlike the media, Local 591 representatives have spoken to the witnesses, and reviewed the documentation provided to the FAA, and have no doubt that the allegations made by our members will continue to be substantiated by the FAA.

Mr. Parker, we are asking you to sit down with the President and Vice president of Local 591 and review the evidence. We are also asking that you allow Local 591 representatives to perform their work free of coercion.

Compliance with the maintenance manuals and the IAW program is both your legal and moral obligation. Union representatives play a vital role in counter-balancing the profit-driven goal of pushing planes into revenue service. We have asked AMTs who detect improper maintenance practices to notify their Local 591 representative and file an ASAP report. Our goal is not only to protect their jobs and licenses, but to ensure the safe operations of, what is now, the world’s largest airline. Local 591 believes this airline should be the example of what other carriers should emulate when it comes to aircraft maintenance practices and procedures.

We regret that it apparently required a federal lawsuit to produce this first step in the right direction. It’s so much easier to recognize that safety is a joint effort for labor and management, rather than shallow words expressed to move people along. Local 591 has only one goal, providing our passengers and flight crews with safe and reliable aircraft. But if management continues to chose to slap our hand away from doing what is required by the IAW settlement reached by AA, in reducing the overall fine with the FAA, we will continue to fight back by serving our membership’s primary interest, including litigation if and when necessary.