Qatar Airways CEO Akbar Al Baker is getting back to Etihad Airways about Etihad’s widely-published revolutionary Residence in the Sky.

Qatar Airways CEO Akbar Al Baker is getting back to Etihad Airways about Etihad’s widely-published revolutionary Residence in the Sky. An obvious jealous CEO during a recent press conference in Doha, he announced that the airline was working on the development of an entirely new business class seat for their long-haul fleet, which in his words will make the need for the retention of a First Class, except for the Airbus A380, obsolete.

Tongue in cheek as he often does, he then poured some humorous scorn over his airline’s closest competitors when he declared that as often in the past they would then no doubt follow suit and copy what Qatar Airways had invented. The new seat will very likely be revealed in the 2016/17 time frame and is expected to set new standards for business class around the world.

The just-revealed Airbus A350 XWB Business Class layout is already in a class of its own, offering that extra feeling of space and privacy in the 1 x 2 x 1 configuration, with an added area to “socialize” where the exits are located. This not just rivals, but outclasses most present-day First Class compartments of many of the legacy carriers, and the service on board the A350XWB, while not yet sampled, has been described as the non-plus ultra in refinement and quality by Qatar Airways staff in the know. With such added credentials, Qatar Airways is expected to once again bag the award for the world’s best business class, which would make it three years in a row.

That said, as the majority of travelers, of course, fly in Economy, the airline has also paid attention to the layout of the A350XWB rear cabin, and the 3 x 3 x 3 configuration; almost all other airlines squeeze in an extra seat in the mid-section, but Qatar offers seats with an impressive 18” width, the widest presently available in any economy class around the world. The inflight entertainment in Economy uses the latest technology with one of the widest screens on the market, ensuring happy viewing of hundreds of program elements, going easy on the eyes and this is bound, combined with superior catering, to get yet more accolades and awards as time goes on.

The new bird will stretch her wings for the first time in just 6 days’ time when commercial operations commence on the route to Frankfurt, before the delivery of several more A350XWB this year will allow Qatar Airways to expand the destinations served by the world’s latest technology aircraft. The first flight to Frankfurt has predictably been sold out, as aviation buffs have lined up to be among the first to fly on the new aircraft and demand for subsequent flights remains heavy, an indication of the magnetic flair the new aircraft brings with it. 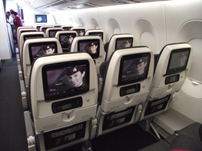 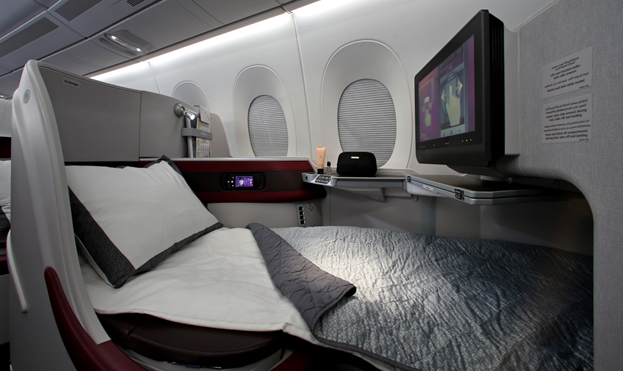 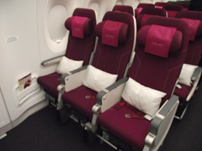 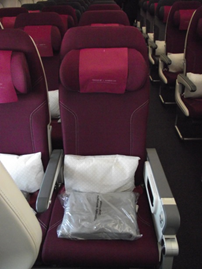 Qatar Airways has another 79 such aircraft on order, including the Airbus A350XWB-1000 variant which will be ready for flight later in the decade and will probably sooner than later begin to replace the airlines’ A340 fleet and early versions of the A330.

Given that the -1000 version will already join service with the presently under development new Super Business Class seat, this will become a game-changer in aviation. It will be offering a fusion of First and Business Class and perhaps leaves those looking for “Villas in the Skies” to ponder if not to invest in a proper villa on the ground on The Pearl in Doha and pay for it with the savings made when flying in the all-new Qatar Airways front cabin after the new seats are launched.